Burning gasoline or diesel is still the most convenient and flexible power source for long distance driving that extends beyond the initial driving range of a vehicle.

Yet, more all-electric models are gaining highway credibility with bigger batteries and faster recharging. Which vehicles are the best value for long-distance capability today?

Anything on the market from Tesla remains by far the best answer. The Model S, Model Model X, and Model 3 all have at least 200 miles of highway range and can utilize a large network of Supercharger locations. They also sell at a premium price.

Although Tesla aims to sell a $36,000 (delivery fee included) basic version of the Model 3 in the United States it isn’t actually scheduled to be available until late this year for customers who have already pre-ordered it. In the meantime, people are paying upwards of $50,000 for the Model 3 cars being manufactured now which all include the $9,000 extended range battery option and the $5,000 premium package. Add another $1,000 for any color other than black. The S and X models are even pricier.

For that $50,000 you get 295 miles of EPA highway range and 310 miles EPA for the combined city and highway estimate. Eventually, with the cheaper standard battery, the combined range is expected to come in at around 220 miles but there are no officially published results yet.

With the long range battery version’s highway rating of 123 MPGe and an initial recharging rate of a bit over 110 kW, today’s long range Model 3 can add about 170 miles of range in 30 minutes, according to Tesla. The company says the standard range battery will add about 130 miles. Tesla’s Superchargers are available on many highway routes throughout the U.S. Coverage in Canada and Mexico is limited. 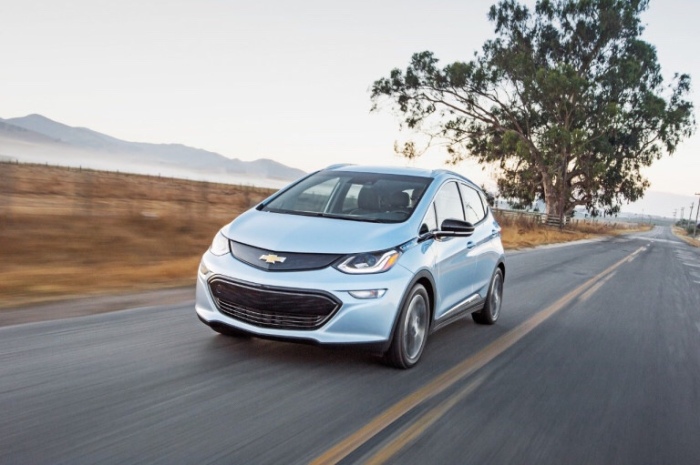 Next in line is the Chevrolet Bolt EV. It sells for a base price of $38,245 (including DC charging option) but, unlike Tesla, it sells through an independent dealership network and substantial discounts are available in California and some other markets. A few monochrome shades from black to white are available at that price but premium red, orange, and blue colors are $395 extra.

With 217 miles of EPA highway mileage (238 miles combined) and a 110 MPGe highway rating, the Bolt is more efficient than some assume based on its short and boxy shape.

On the new generation of CCS DC charging equipment just beginning to be installed, the Bolt can reach a peak charging power of 55 kW. It can add about 90 miles in 30 minutes, according to GM. That’s about 10 to 20 percent faster than on the older 50 kW (125A) CCS chargers typically available today when charging in the lower half of the battery state of charge.

CCS chargers today are mostly available around metropolitan areas near larger cities although usable highway corridor charging is available in some areas, particularly in parts of the east and west coasts of the U.S. Highway charging for the Bolt EV and other cars that use CCS is expected to dramatically improve over the next two years with the construction of Electrify America’s charging network.

Although the Bolt charges slower than the Model 3 the perceived difference can be less apparent than the raw numbers would indicate as long as you are doing something useful during the charging process and aren’t urgently pressed for time. Stated another way, the experiential difference between recharging in 5 versus 20 minutes can be much greater than a difference of 30 versus 45 minutes.

If charging takes a few minutes, as in refueling a gasoline vehicle, it’s no big deal to stand around waiting. If recharging takes 30 minutes, many people will want to go do something else like using the bathroom and buying a coffee or sitting down for lunch at a restaurant. In that case, 30 minute charging can ironically sometimes be too fast.

A third all-electric car brand that is good today for road trips is not as obvious.

At first glance, you might think the 2018 Nissan LEAF starting at $32,465 (with DC charging package) could be a good long-distance driver. It has 133 miles of EPA highway range (151 miles combined) but it turns out that the new LEAF has a recharging problem. Unlike the Teslas and the Bolt EV, the LEAF has no active liquid thermal management (cooling) for its battery. In fact, it has no active thermal management at all beyond reducing its CHAdeMO DC fast charge rate when the battery gets too hot.

The LEAF’s battery is sealed from ordinary internal air flow and has no fan. It just sits there passively radiating or absorbing heat from the surrounding vehicle body and external environment. While driving, air flows past the outer shell of the battery case but it isn’t all that effective and, of course, does nothing to help during fast charging when heat can quickly build up.

In spite of this, previous models of the LEAF could be driven on longer trips and fast charged multiple times although this required relatively frequent stops due to the shorter driving range. The 2016-2017 LEAF with its 30 kWh battery and 96 mile EPA highway range (107 combined) was an improvement over the original 24 kWh battery’s 74 mile highway rating.

With it’s new 40 kWh battery in 2018, the LEAF would seem like a contender for longer-distance driving. It is, but only for trips less than around 250 miles which need only a single fast DC recharging session. Initial testing by new owners is showing that the pack heats up faster during driving and recharging and cools down slower than the older and lower-capacity packs. It also is more aggressive about slowing it’s recharging rate when the battery temperature rises much above 38C (100F).

Real world testing has shown that normal highway driving and a single fast DC charge can raise temperatures to that level or above and commonly result in subsequent recharging power dropping from 40 to 50 kW down to about half that level which nearly doubles the time it takes to charge at subsequent DC charging sessions. Colder winter ambient temperatures may delay the charging slowdown until after the second DC fast charge. Hotter summer conditions could result in slower recharging on even the first session in areas like Arizona, Nevada, or California’s Central Valley.

Another car without active battery thermal cooling is the Volkswagen e-Golf at $32,340 base price with the CCS DC charging package. It’s 36 kWh battery sports a highway EPA range of 118 (125 combined). Because it lacks active thermal management it can have similar heat dissipation issues as the Nissan LEAF when driven longer distances.

Oddly, Nissan for several years has used forced-air active cooling for the otherwise nearly identical battery pack it uses with its e-NV200 commercial delivery van. This apparently remains true for the new e-NV200 40 kWh battery this year. Fan-driven active air cooling for battery packs is common in hybrid vehicles like the Toyota Prius, and is even used in all-electric models like the Kia Soul EV.

Speaking of which, the Ioniq EV’s 28 kWh battery with 110 miles of EPA highway range (124 combined) is capable of charging at up to 70 kW at past 80 percent state of charge. It also comes with CCS DC charging at a lower starting price of $30,385.

Even with its smaller battery pack and range, it’s faster charging rate on the upcoming CCS charging infrastructure makes it a contender. Unlike the liquid-cooled battery packs in the Bolt EV and Tesla models, the Ioniq gets by with an actively managed fan similar to the Kia Soul EV which blows cabin air through the battery pack.

Unfortunately, the Ioniq EV is difficult to obtain and is only distributed to dealers in California for now. Only 544 of them have been delivered to US customers in the 12 months between it’s first deliveries in March, 2017 and this year. Some customers who placed orders in the fall of 2017 are apparently still waiting for their car to arrive at their dealer.

In recent days, Hyundai dealers have been notified that 2018 Ioniq EVs can no longer be ordered due to a battery shortage at the factory in South Korea. New pre-orders are now reportedly being made against the 2019 model year but pricing and model year changes have not yet been announced although deliveries are said to be planned for this summer.

All of these cars are still eligible for up to the full $7,500 federal tax credit but that may change soon as some car makers begin to exceed their individual 200,000 EV credit limit. After that, the available tax credit begins ramping down over several quarters.

Fortunately, the next year or two promises to bring several new longer-range vehicles to the market with faster recharging rates. Kia and Hyundai have announced relatively value-priced 64 kWh all-electric versions of their Niro and Kona compact SUVs with well-over 200 miles of range and with liquid-cooled battery packs. At the spendier end of the market, Jaguar is introducing its 90 kWh I-PACE late this year and Audi is bringing its 95 kWh e-tron both with 200+ mile range, liquid-cooled packs, and 100+ kW charging rates.

At the very high-end, Porsche aims to bring its Mission E concept SUV to market in late 2019 or early 2020 with a large battery pack of 200+ miles of range together with recharging rates in the territory of 300 kW. This should finally make 10 to 20 minute ultra-fast DC recharging stops possible — but perhaps too long to stand around waiting and too short to leave and do something else.