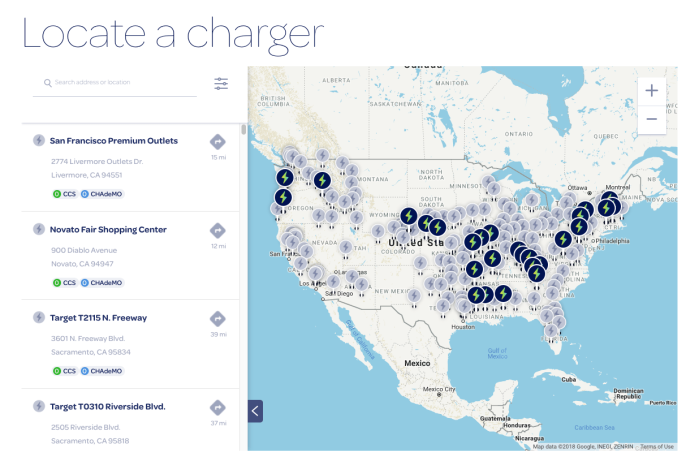 Electrify America overhauled its website content today including an improved location map which is now zoomable and filterable. In the process, the charging site operator added an additional 94 locations for a total of 134 specific sites under active development. The network has 27 locations already open for charging.

A total of 16 sites are now listed as “coming soon” to California including two in the larger San Francisco Bay Area, four near Sacramento, and four in the Los Angeles area. Another two are located along CA-99 north and south of Fresno and one is located along I-5 just northwest of Sacramento. Finally, a location is listed in Pismo Beach along CA-1 and another in El Centro along I-8 near the border with Mexico.

Additional states with substantial new listings include Texas and Florida.

This new map does not show all 484 of the planned sites that are part of the first cycle of spending which ends in June, 2019. California alone is planned to get about 160 locations during that first cycle but only 16 sites are listed today as coming soon.

In other recent news, the company announced yesterday that it has signed an agreement with the Ohio Turnpike and Infrastructure Commission to open two locations each in the towns of Genoa and West Unity.

The company, a fully-owned subsidiary of Volkswagen, also announced network interoperability roaming agreements with the charging providers EV Connect, Greenlots, and SemaConnect. The agreement will allow customers with an existing account with one of those networks to use chargers at another provider’s charging sites.

Like Loading...
‹ Frigidity and the challenge of high-power coupling
In Q3 update, Electrify America says Cycle 1 CA highway sites on track for June, 2019 ›