Home › Battery › Jaguar and Chevy have LG in common

Jaguar and Chevy have LG in common

The Jaguar I-PACE is a swanky new all-electric SUV with a generous wheelbase, a large 90,000 watt-hour battery pack and a $70,000 starting price. The Chevrolet Bolt EV is a small hatchback wagon with a 60 kilowatt-hour pack and a rather basic interior that starts at around $37,000 before rebates and credits.

Although these vehicles come from different makers and are targeted at different customers they appear to share similar battery cells within liquid-cooled packs that ride underneath the floor as a structural part of the vehicle unibody.

Dr. Danson Joseph, the leader of the I-PACE battery group, holds one of the car’s LG cells.

This image of a cell being sold at a Chinese commerce website has the same appearance and LGX N2.1 designation as the cells used in the Chevrolet Bolt EV.

As can be seen in the photos above, the cells are similar in physical size and shape although the Bolt EV cells have the battery connection tabs located at the center of the ends of the cell while in the I-PACE cell the power tabs are more strongly offset towards one side of the cell. The cells also have different colors along the corners with the Bolt cells showing yellow and the I-PACE cells with green. The Bolt EV cells are made in an LG Chem factory in South Korea. The I-PACE cells are made in the company’s recently completed factory in Poland.

Automakers and their battery suppliers are typically skittish about supplying detailed specifications of their batteries including the precise chemistry, and energy density by weight and volume. While they will discuss the limits of the car as a whole they usually don’t disclose the actual limits of the underlying battery cells.

That tells us that these cells appear to have the same basic shape and visual appearance, come from the same supplier, and store about the same amount of energy.

The official LG specifications for neither of these cells appear to be public. However, what appear to be Bolt EV cells are now available for purchase in modest quantities on Alibaba, an online market similar to EBay but targeted towards business to business transactions by Chinese companies. Other online companies in China appear to have offered them for sale recently as well. 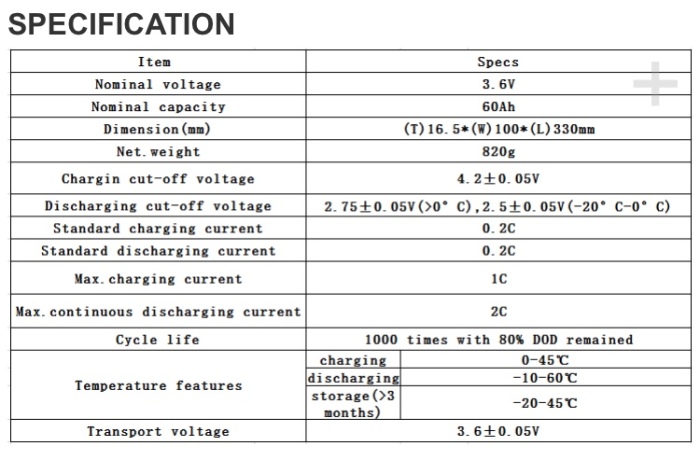 This specification table for apparent Bolt EV cells is from an Alibaba listing.

One site gives a nominal voltage of 3.6V while the other reports slightly different specifications which give the nominal voltage as 3.7V. A third site allows that the actual storage capacity is 60 Ah but could vary between 58 and 62 Ah in different cells. Sample photos of the cells on sale match the known physical appearance of the cells used by GM and contain the same “LGX N2.1” printed marking.

The I-PACE’s 432 cells are collected into 36 separate modules of 12 cells each. A liquid thermal management system build into the frame of the aluminum pack structure keeps the modules and cells within 2 degrees centigrade (3.6F) of each other, according to Jaguar. The pack may use a bottom coolant plate similar to the Bolt EV although this has not been specifically disclosed by Jaguar. Statements by Jaguar employees appear to confirm that the cells are connected to operate at a higher than usual overall pack voltage level with groups of 4 cells wired in parallel and then strung into 108 cell groups in series. Most modern electric vehicles like the Bolt EV and Tesla Model 3 use 96 cell groups in series for a nominal overall pack voltage near 350V.

The I-PACE battery pack and it’s 36 modules are visible in this image from Jaguar.

Wolfgang Ziebart, Jaguar’s Technical Design Director, stated in a 2017 interview with Automotive News that the I-PACE concept contained cells which are 58 Ah. Jaguar has also said that the peak voltage of the pack when fully charged is kept just under 450V. Higher pack voltages can allow for somewhat quicker charging when using present generation fast chargers that are current limited to 125A.

With 3.7V as the nominal voltage per cell the 108 cells in series would be a nominal 399.6V. When a battery is charged the voltage rises and such a pack could be a bit over the 450V top limit of the stated I-PACE design when full. GM has documented that the Bolt EV’s nominal pack voltage is 350V and with 96 cells in series that works out to 3.65V for each cell group. Bolt EV owners have reported pack voltages between 395V and 400V when fully charged using tools connected to the car’s OBD II internal vehicle monitoring port. This, together with the conflicting voltage claims of 3.6V and 3.7V on the Chinese commerce sites, suggest 3.65V as a realistic nominal cell voltage resulting in either 212 Wh of energy capacity at 58Ah or 219 Wh at 60 Ah.

This would be about 91.5 kWh assuming 58 Ah cells for the I-PACE and 63 kWh assuming 60Ah cells for the Bolt EV. Although its difficult to estimate accurately, the cells appear to have an effective volume of just under half of a liter (270mm x 100 mm x 16.5mm of electrode material) and a weight of between 800g and 850g according to the various Bolt EV cell Chinese market specification claims. It’s possible the cell design used by Jaguar is slightly tuned for increased power for the I-PACE and thus slightly lower energy storage capacity than those used for the Bolt EV.

Update: Jaguar has released the I-PACE ownership manual online and it states the car’s battery pack as having a nominal voltage of 388V. This is equivalent to a nominal cell voltage of 3.6V. At 58 Ah per cell and 108 groups of 4 cells in parallel that works out to 90,016 Wh (388V x 58 Ah x 4 parallel cells) which is (perhaps suspiciously) almost exactly 90 kWh. The manual also gives the usable pack energy as 84.7 kWh.

An apparent thermal transfer pad is applied to the base of a prototype I-PACE battery pack. One of the 36 cell modules will later be installed above it. Although unstated in the Jaguar video, there is likely a liquid coolant tray underneath the pack.

At the pack level, GM filings with the EPA report the Bolt EV gravimetric energy density as 140 Wh per kg. Larger packs typically have a better ratio of battery cell to pack structure overhead. Jaguar has said the I-PACE concept’s pack weighs between 550 and 600 kg which would mean a pack density of a minimum of 150 Wh per kg and maximum of around 165 Wh per kg.

Tesla has told the EPA that its long-range Model 3 pack is 150 Wh per kg, however that includes some added weight from the AC charging circuitry and the 12V DC down converter that were integrated into Model 3 pack. Accounting for that added weight, which is typically not included in other battery pack designs, could bump the Model 3’s pack energy density above the high end of the possible range of the Jaguar pack. There is no publicly available filing yet for the standard-range Model 3 pack.

A recent YouTube video from Weber State University’s automotive department shows the teardown of a Bolt EV battery pack. During the disassembly, LG labels on the pack and modules appear to show a total energy storage capability of 57 kWh. The pack consists of 10 modules. Of the 10, 8 are labelled as holding 5.94 kWh in 30 cells. The remaining 2 modules are stacked near the back of the pack (under the rear seats) and are labelled as holding 4.75 kWh with 24 cells.

What are we to make of that? Is that meant to be 57 kWh of nominal capacity with a usable capacity that is even less? That would not appear likely since several drivers have reported that the energy use screen inside the car appears to show that driving a fully-charged battery down to near empty uses about 58 kWh of energy. Fully charging the Bolt with a 240V charging station from empty to full also appears to take about 66-67 kWh of energy. That approximate 9 kWh charging loss is typical for electric cars charging at 240V at 32A for a battery with 57 or 58 kWh of usable storage.

Although the LG cells used in the I-PACE and the Bolt EV have slight differences in appearance could they actually be using the same internal chemistry and construction and thus have the same performance specifications? It is certainly possible but not necessary. Even if using the same cathode and anode materials, cells can be constructed with slight differences in the thickness and porosity of the electrode layers in order to make tradeoffs between power and energy density.

The I-PACE’s identical front and rear motors are each rated at 197 horsepower for a combined peak of 394 HP (about 294 kW). That’s nearly twice the power of the Bolt EV’s single 200 HP (150 kW) motor. Since the Jaguar’s battery is only 50 percent bigger that means the I-Pace places a higher relative demand for power from its LG cells.

Power is an issue during recharging as well. Jaguar says they can charge the battery at power rates as high as 100 kW during the first 15 minutes of charging from empty when plugged into the coming new generation of CCS ultra-fast DC chargers. Charging from 0 to 80 percent is said to take as little as 40 minutes although some Jaguar materials say less than 45 minutes.

At the product reveal, which was recorded and is available for viewing on YouTube, a live demonstration charging session appeared to go as planned initially but later reported only charging to 62 percent after 40 minutes. This discrepancy was not explained.

The specifications at the online sites selling apparent Bolt EV battery cells indicate a maximum charging current of “1C” which means, essentially, 90 kW for a 90 kWh battery. The I-PACE can charge at up to 100 kW. Chevrolet allows a peak charging power of about 56 kW for the Bolt EV’s roughly 60 kWh pack.

The online cell specifications also show a maximum continuous discharge current of 2C and one site shows a peak temporary (typically meaning 10 second) burst of current as high as 5C. For the I-PACE that would be about 180 kW continuous and 450 kW peak which could be consistent with the Jaguar’s peak motor output of 294 kW. Another Chinese site offering to sell the apparent Bolt EV cells said they had a peak discharge of 200A which is equivalent to around 3.3C. This would still appear to nearly match the I-PACE’s peak requirement for roughly 300 kW of battery output.

It’s possible that the I-PACE is using a new generation of cell cathode chemistry called NMC 811 that LG is reportedly bringing onto production sometime this year that further increases the ratio of Nickel versus the more expensive Cobalt in the cathode material mix. Little is known publicly about the specifications of these new generation of cells. They may be a bit more energy or power dense but their development is thought to be largely driven by cost reduction. The Bolt EV cells are already described by GM as being “Nickel-rich” but the actual ratios of Nickel, Manganese, and Cobalt have not been disclosed.

Update: It now appears most likely that the Bolt EV and I-PACE battery cells from LG are using the same basic NMC 622 cathode chemistry as the new Hyundai Kona EV. LG is reportedly not yet manufacturing NMC 811 cells in the pouch format used by these cars. Hyundai has confirmed that the LG cells in the Kona EV use NMC 622 — 60 percent nickel, and 10 percent each of manganese and cobalt.