Ford’s new Mustang Mach-E is now out of the barn and into the spotlight. What makes it run? What’s under that body sheetmetal that makes it go without the vroom vroom gasoline engine?

On the left, is the Mach-E large motor. This motor is always used for rear wheel drive but is also used in front for adding all-wheel drive on the GT Performance Edition. Its capable of a peak of 282 HP (210 kW) and 306 pound feet (415 Nm).

On the right, the smaller motor is used when adding all-wheel drive on non-GT cars. It’s capabilities are a bit less certain but the vehicle specifications imply it is capable of a peak output of at least 67 HP (50 kW) and apparently around 111 pound feet (150 Nm).

The outer part of these motors is known as the stator because it stays in place. The inner part is called the rotor because it rotates. The strong permanent magnets, made with so-called rare earth metals, are embedded inside the rotor. These motors are custom designed by Ford itself. Their design type is technically known as an AC interior permanent magnet synchronous motor.

Another view of the motors with the smaller motor up front towards the camera.

Both motor stators are wound with heavy square copper wire which is connected to the power inverter. Three phase AC currents create a rotating magnetic field that runs slightly ahead of the rotor magnets to pull the car along or rotate slightly behind in order to regeneratively brake. Some other carmakers use motors wound with lots of thinner copper wire.

The front power electronics and front motor are mounted under the hood behind the frunk.

On the top left is the power inverter that supplies the motor current through the orange cabling connecting to the motor below. On the top right is the DC to DC converter that takes the place of an alternator in a gasoline car and supplies 12V power to the lead acid battery circuit. Underneath the inverter and DC converter is the built-in AC battery charger that connects to the J1772 socket just ahead of the driver’s door on the left side of the car. It converts AC to DC for feeding the battery pack.

The various components are liquid-cooled. You can see the connecting pipes sticking out for connection to coolant hoses.

Jalopnik quotes Ford as saying “special valving allows for the heat from the motors and power electronics to be used to warm battery cells (there’s also a resistance-style heater to help with that).” 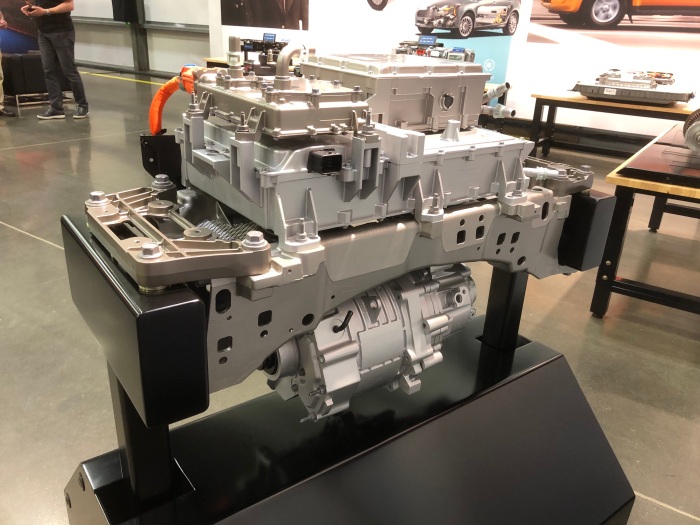 A view of the same front motor and electronics stack from the other side.

Underlying it all, the battery pack. In this case, the large range 98.8 kWh lithium-ion pack.

Below the pack, to the left of the yellow “High Voltage” caution sign, is a sample of an individual battery cell. Two of these cells, made by LG at their factory near the city of Wroclaw in Poland, are packaged into each of the black frames that are then grouped together into modules.

There are 10 modules containing 16 frames each. Two of those 16-frame modules are mounted in a second layer on the far left side of the pack. That raised layer nests under the rear seats. In the standard range pack those two top modules are missing. Two slightly smaller modules containing 14 frames each are on the right side of the pack image. Underneath all of the modules there are water and glycol-based coolant plates that keep the battery cells at a happy temperature. 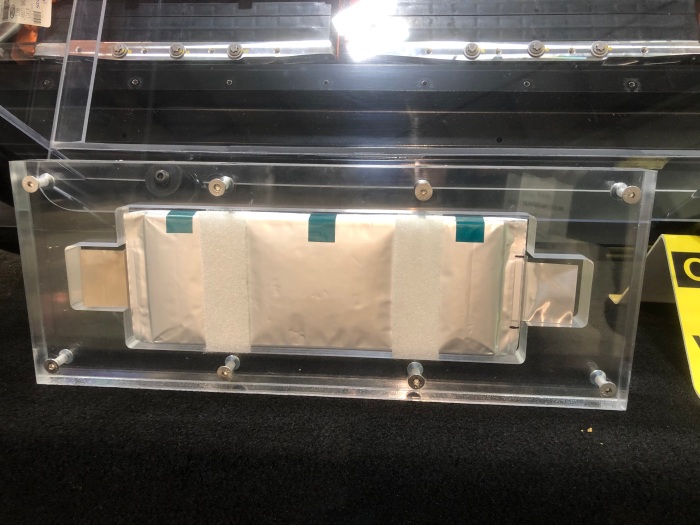 A closeup of the sample individual battery cell. The negative and positive power connection tabs extend off from the left and right ends of the cell. 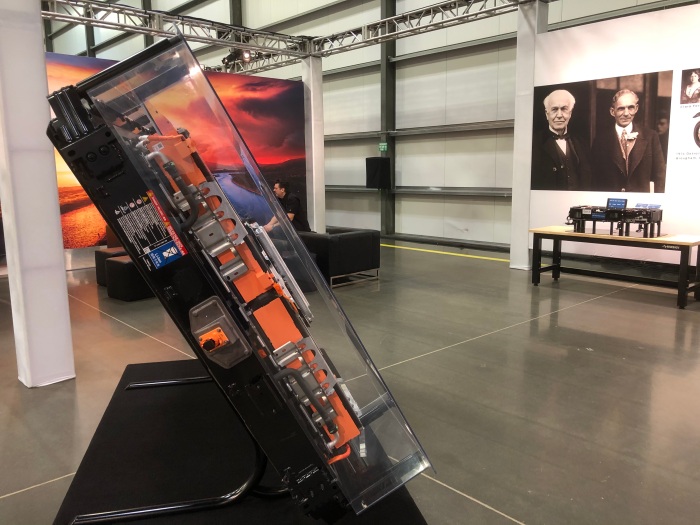 A view from the rear edge of the pack. Thomas Edison (left) and Henry Ford (right) gaze approvingly towards the battery from the background.

A look at the dark side, which faces down towards the road when installed in the car.