Conflicting values for the energy capacity of the Chevrolet Bolt EV battery pack coming from LG and GM are actually consistent and are just reporting different ways of measuring energy storage capacity, according to GM spokesman Christopher Bonelli.

Recent photos taken during a Bolt EV battery pack disassembly at a GM dealer and in a series of pack disassembly videos on YouTube show that LG labels inside the pack rate it as holding 57 kilowatt-hours (kWh). GM has marketed the Bolt as having 60 kWh of energy storage and have also used that value in documents filed with the U.S. Environmental Protection Agency.

“The 57 kWh number on the battery label is the “rated energy”, a regulatory requirement that represents the absolute minimum energy content (under worse case scenarios), not the energy target. Accounting for typical statistical variation, LGE [LG Electronics] has been delivering the targeted 60 kWh of nominal pack energy”, Bonelli said.

Indeed, according to multiple owners, the energy use display on the center infotainment screen typically shows values implying that the full battery pack is often capable of providing 58 to 59 kWh of usable energy. GM’s nominal rating of 60 kWh does not represent the energy usable by the driver since, according to Bonelli, “we do allow for a small buffer in the battery to ensure battery life and durability”. 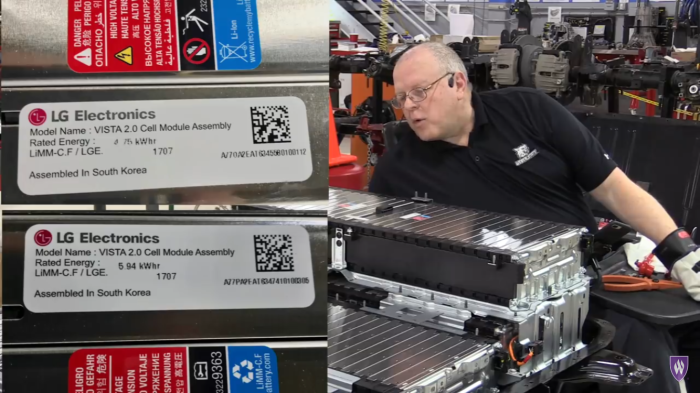 Professor John Kelly of Weber State University reads the energy capacity labels from the two different battery module sizes used in the Bolt EV pack. In total, there are 8 modules declared as 5.94 kWh and 2 modules declared as 4.75 kWh. The mixed pack sizes are used in the stacked portion of the pack which is installed under the rear seats. The full video is available on YouTube.

The “rated” and “nominal” energy values differ because they are measured under different conditions. There is no industry standard for what those conditions should be so battery manufacturers normally document the conditions under which their own published measurements are made. 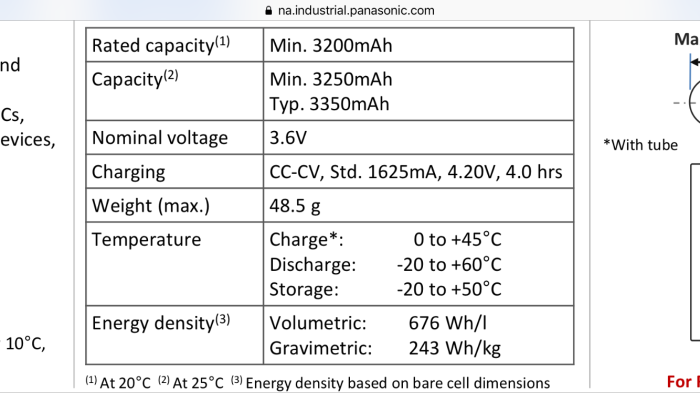 As an example, a Panasonic battery specification footnote (shown above) states that the “rated” value of the cell was measured at 20C (68F). The higher “nominal” energy value was measured at the warmer temperature of 25C (77F). The rated and nominal measurements could also, in some cases, be taken at different current discharge rates and ending voltages.

In the case of the Panasonic cell, the typical (nominal) energy capacity is about 5 percent higher than the “rated” capacity which is similar to the difference between the rated and nominal capacities reported by LG and GM for the Bolt EV pack.

LG and GM have not released detailed battery cell specifications so the details of how the rated and nominal measurements were taken with the Bolt EV cells is not known.

As can be seen, determining and reporting the exact energy capacity of a battery is complex which makes close comparisons among the packs in different cars difficult.

See: Jaguar and Chevy have LG in common