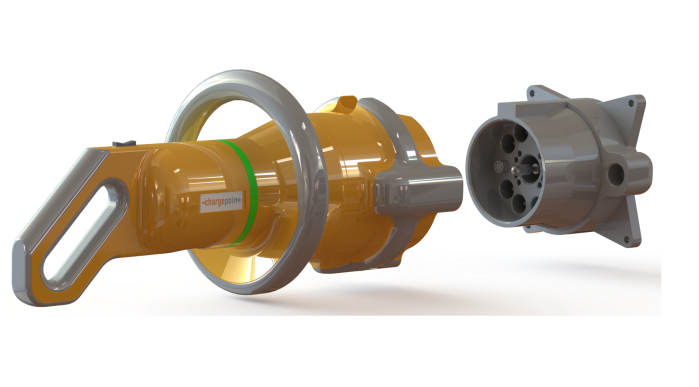 ChargePoint revealed a “first-ever concept design” for a 2 megawatt electric charging connector intended for use with large electric trucks and airplanes at the second annual Elevate Summit conference in Los Angeles last week. The new connector appears to share similarities with the basic electrical charging design used in early Tesla Semi truck prototypes but not officially revealed by Tesla.

The conference was organized by the Uber ride-sharing service as it seeks to expand into using Vertical Takeoff and Landing (VTOL) electric aircraft for passenger service in selected cities as early as 2023.

The new connector appears to utilize 4 pairs of the liquid-cooled 500A DC charging pins used in ChargePoint’s Express Plus CCS industry-standard charging connector for electric vehicles. The new connector concept places these pins within a new rugged round connector with a notch that aligns the plug and socket during insertion. A heavy-duty ring circling the middle of the connector provides protection against impact damage if dropped.

A screen capture of a Tesla Semi truck charging inlet taken during the reveal at Tesla’s Hawthorne, CA facilities on November 16, 2017. The full video can be seen here.

Likewise, the charging inlet on at least one of the Tesla Semi trucks at the official product introduction last November also has 4 pairs of charging pins. Tesla has not officially revealed the design or capability of the Semi truck connector but has referred to a future dedicated truck Megacharger network. It’s description of the truck prototype’s driving range and charging capability also seems to imply a charging rate of at least 1 megawatt.

Given the practicalities of high-power charging design and the recent standards work for CHAdeMO and CCS it seems probable that the Tesla Semi’s connector power pins operate at similar power levels as the ChargePoint connector.

Tesla’s existing Supercharger network supports an output range of about 50 to 430 volts (at 375A or higher) and the new high-power Megacharger design likely doubles that to the neighborhood of 100 to 860 volts (or more).

Doubling the output voltage range can eases hardware sharing and compatibility if Tesla updates the Supercharger network and connector to support the same voltage and amperage levels on it’s existing proprietary inlet design for cars much like newer CCS chargers from ChargePoint and others support double the previous 500 volt limit but continue to work with older vehicles.

Tesla’s future Roadster concept has a 600 mile driving range and a 200 kWh battery pack stated by CEO Elon Musk that they would likely want to charge at higher power levels than today’s Superchargers can support.

ChargePoint hints that it is following a similar equipment design sharing strategy. It’s Express Plus Power Block is already said to be capable of being configured to support 500 kilowatts (500A at up to 1,000V) on a single CCS connector. European charging equipment maker ABB also supports a CCS charger configuration with up to 500A at up to 920V on a Terra HP product line now being installed at some Electrify America charging stations in the United States and by other charging providers in Europe.

In its press release, ChargePoint says its connector design can also support an optional liquid-coolant line connection into the truck or airplane being charged although no details are given. Vehicles today sometimes provide their own built-in liquid or forced-air cooling of the battery pack. Cooling of the vehicle charging inlet can be performed indirectly today though the thermal conduction of the directly-cooled charging pins in the connector plug.

As for low-voltage signaling pins, the ChargePoint connector appears to have 10 of them arrayed in 2 arcs of 5 on opposing sides of the connector. It isn’t clear what they are all used for. In a CCS connector there are 2 signaling pins: a Control Pilot which carries data packets for the TCP/IP-based communications between the car and charger, and a Proximity Pin which indicates that the connector is fully seated in the inlet socket and signals if someone has pressed a disconnection button on the charging connector handle. A larger ground pin is located in the center of the connector. It’s unclear what the apparent additional 8 smaller pins might do.

The Tesla Megacharger inlet image quality is too low to reveal definitive details but it may just contain the equivalent of the CCS connector’s Control Pilot, Proximity Pin, and ground as is present in Tesla’s existing Supercharger connector used for cars.

Missing from the pictures of the ChargePoint and Tesla designs is the charging cable itself. Is there one single compound cable containing 4 internal cables, one for each pair of charging pins? Having 4 liquid-cooled cables independently attached to a “Megacharger” connector seems even more unwieldy. It’s not totally obvious where the charging cable attaches to the connector on the concept images provided by ChargePoint. There is no known public image of what the Tesla Megacharger connector plug looks like — its appearance is merely hinted at by the design of the inlet that it connects to.