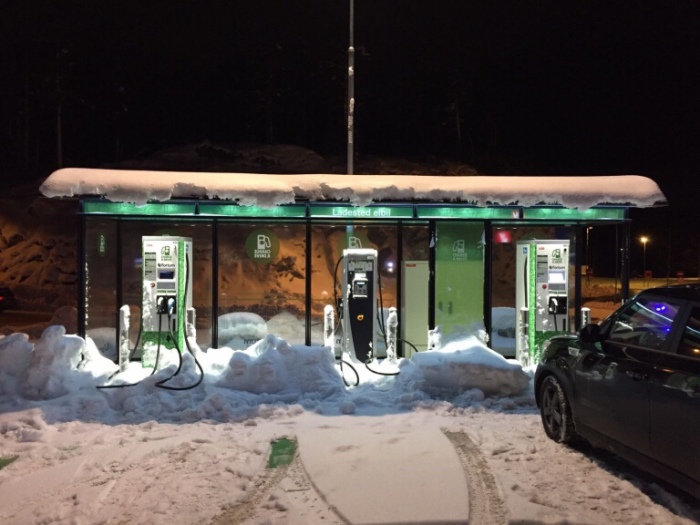 Lithium ion battery cells usually have to charge much slower when they are cold in order to maintain safety and cell cycle life. This can be a problem in winter when you need to fast charge but end up waiting around as the battery pack slowly warms up first.

A new experiment shows a practical way to build heating strips directly inside each cell to bring it to an optimal charging temperature many times faster than with conventional battery pack heating.

A description of the work was recently published in the Proceedings of the National Academy of Sciences.

Lithium ion battery cells have a positive cathode and a negative anode with an electrolyte layer in between along with a plastic separator sheet that electrically insulates the two sides but allows lithium ions to be exchanged from cathode to anode during charging or from anode to cathode when discharging.

At cold winter temperatures, the chemistry going on within the electrolyte and graphite anode of typical lithium ion cells slows down. It takes longer for the lithium ions to travel from the metallic cathode side of a cell through the electrolyte and separator and then bury or intercalate themselves into tiny spaces within the graphite anode material during charging.

This is even more true of the cells optimized for energy density that are typically used for long-range EVs. Their thicker graphite anode layers have less “porosity” to allow the incoming lithium ions to easily find an unoccupied microscopic space to fill.

Plating lithium directly on the anode side is actually a good thing, in theory, because it enables a cell to have much higher energy density than can be achieved by spreading the lithium atoms diffusely throughout graphite.

But there is a problem. It turns out that plated lithium likes to grow dendrites that project away from the otherwise flat surface of deposited lithium and grow towards the adjacent cathode layer of the cell. As the dendrites grow larger they can ultimate needle their way through the plastic separator layer and make direct contact with the cathode and thus short-circuit the cell. Calamity ensues.

In the future, so-called solid-state lithium ion battery cells will gain much of their increased energy density by plating metallic lithium and dispensing with the graphite altogether. The earliest lithium ion battery designs with liquid electrolyte already did this back in the 1970’s but had to switch to graphite anodes due to the dendrite problem.

Solid-state cells avoid the dendrite problem because their solid electrolyte, made from ceramic or other materials, prevents dendrites from growing into the cathode.

Instead, the Battery Management Systems (BMS) used with today’s conventional lithium ion cells oversee the charging process to prevent lithium plating from happening by slowing down the charging rate in order to give the lithium ions time to find a place to lodge inside the graphite.

This BMS-controlled slowdown typically begins at temperatures that fall below around 68F (20C) and gets progressively more severe the colder the battery cells are.

Thus, in order to improve charging rates, almost all plugin cars have a scheme for actively warming the cells faster than they would otherwise warm just due to charging.

In the existing Nissan LEAF models this involves heating pads located inside the battery case. In other vehicles, it may be done with a dedicated heating grid in the inlet for the air blown through the pack as in the Hyundai Ioniq Electric.

In “liquid-cooled” battery packs the “coolant” may be run through a dedicated heater as in a Chevrolet Bolt EV. As an alternative, the Tesla Model 3 has a way of generating intentional waste heat through its motor windings which is used to heat the liquid running through the battery pack instead of using a separate heater.

In any case, the goal is to “quickly” raise the temperature of the individual battery cells so they can charge at a faster pace. But, ironically, all of these schemes are relatively slow. In a car left sitting overnight in winter conditions it can take 10, 20, even 30 minutes or more before the battery is warm enough to charge at anything close to its normal full rate in warmer weather conditions.

This is why it can be better to fast charge before leaving a vehicle to cold-soak overnight in the winter rather than trying to charge a very cold battery pack first thing the next morning.

The key problem with all of these schemes is that they are emitting heat from a single or small number of sources and then attempting to distribute it evenly to all of the cells.

What if each cell had its own built-in heater? Researchers at Pennsylvania State University and Beijing Institute of Technology found a practical way to do that.

They started with a typical pouch cell design that stacks many replicated layers of interleaved cathode and anode electrodes. Into this they added an extra heating layer about a quarter of the way into the stack from both the top and bottom. These two extra heating layers consist of a thin nickel metal foil.

A not-to-scale illustration of the stacked layers making up the width of a battery pouch cell. The experimental cells contain over 30 cathode and anode layers sandwiched together.

The two nickel foil layers actually serve two purposes. In addition to rapidly and evenly heating the cell when current is passed through the foil they can also be used as thermometers since the electrical resistance through the foil changes based upon temperature.

One end of each heating foil is connected in parallel with the negative side of the battery cell and the other end is connected to an extra electrical tab extending from the pouch cell.

Instead of having to initially slow-charge for perhaps 20 minutes or longer, these experimental cells can allow full-rate charging after a very brief self-heating cycle carried out in parallel inside each cell in a battery pack. It all takes less than a minute. 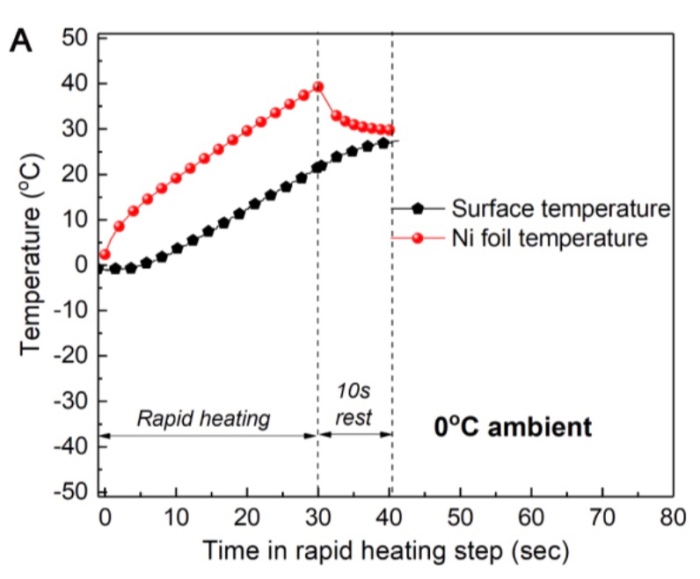 According to the researchers, they were able to repeatedly fast-charge power-dense PHEV-style cells starting from a cold 32F (0C) using a quick heating cycle some 4,500 times with almost 80 percent of their energy capacity still usable. 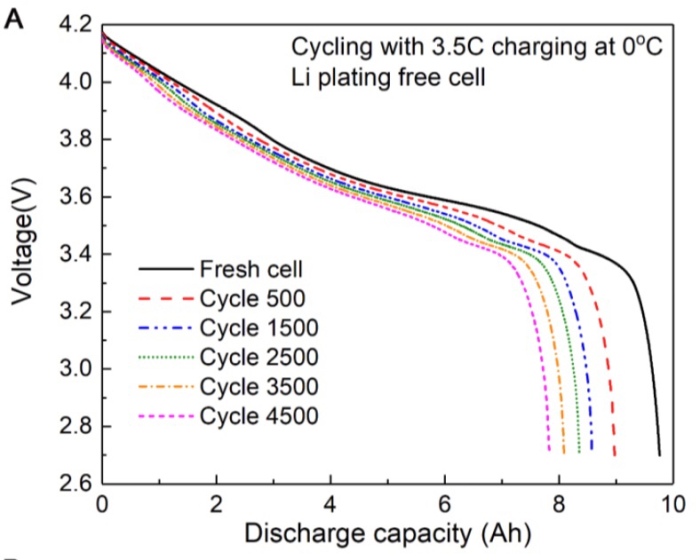 They reported (unsurprisingly) that forcing the same fast charging with unheated cells resulted in a fast drop in energy capacity after only a few dozen cycles, presumably due to lithium plating and dendrite growth on the anode.

The problem with quick charging cold-soaked battery packs is common to essentially all commercialized EVs today.

It is most severe after a vehicle has been sitting in a cold environment for many hours while parked outside or in an unheated garage overnight during winter.

Cold battery packs may be only mildly limited in their power output ability so driving is only a problem under the most severe cold temperatures (although regenerative braking may be limited). Driving alone will gradually warm the battery but it may not be enough to enable immediate fast charging.

One workaround for existing packs is to add a feature that allows the driver to request pre-heating of the battery pack in advance of fast charging. Tesla is said to be working on such a feature and other car makers could do likewise although perhaps only via a future dealer-installed software update.

Until then, in an emergency, you could try a series of rapid accelerations to heat the battery pack although doing so on slippery winter roads may be a concern.

Further details in the paper are described in an article at GreenCarCongress.