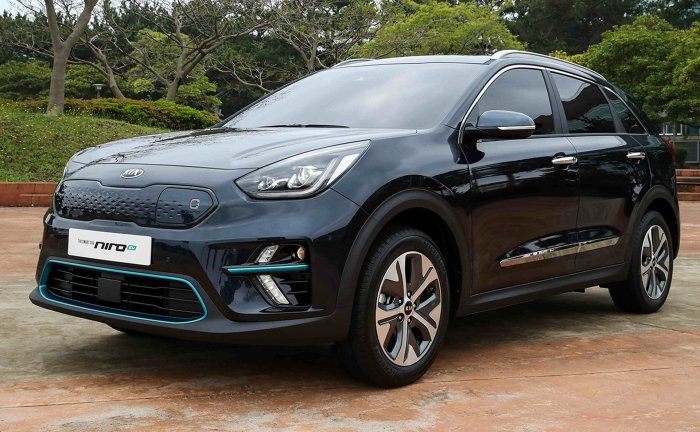 The Kia Niro EV officially debuted in Europe as the Kia e-Niro at the recent Paris Motor Show in France. Even though it evidently shares many powertrain components with the Hyundai Kona EV, the Niro is a distinctly different vehicle.

Bjorn Nyland recently compared the interior and exterior design of the two cars side by side during a trip to South Korea where both are already on sale. Sales of the Niro EV and Kona Electric aren’t expected in the US until late 2018 or early 2019. Neither vehicle has US pricing details available yet.

The powertrain components share the same specifications. Documented illustrations and photos of those components make clear that they are, in fact, the same. The motors are rated for 201 horsepower (150 kilowatts) of output with a peak torque of 291 pound feet (395 Nm). Both have a battery pack energy capacity of 64 kWh using the same mostly flat shape (except for an extra stack of cells under the rear seat area). One difference — the Kona uses battery cells from South Korea’s LG whereas the Niro uses cells from LG’s Korean competitor SK Innovation.

The Niro has slightly larger dimensions and thus gets slightly lower driving range and efficiency scores although there aren’t any official US EPA number available yet. It is rated as 236 miles using South Korea’s test cycle was is closely based on the EPA cycle but can be slightly more pessimistic. The Kia US website says the range may be “up to 240 miles”. The Kona Electric is rated at 258 miles EPA.

Electric Revs recently drove the new Kona Electric and favorably reviewed it. Click on the link below to read that in-depth review.