EVgo’s charging site in Baker, California has now finally enabled its new high-power chargers including one that supports up to 350 kW and three others that support at least 150 kW.

The Baker site is a special demonstration project approved under a broad legal settlement between EVgo and it’s former parent company NRG and the state of California. Much of the equipment was installed as far back as late October but wasn’t completed and turned on for general public use until now.

Now, all six charging dispensers are active. Two are old-style 50 kW chargers made by the electrical equipment company ABB. Two others are new-generation models also from ABB one of which is rated for 350 kW and another of which is rated for 175 kW. Another two are made by BTC Power and are rated for up to 150 kW.

This is a boon for travelers between Los Angeles and Las Vegas as Baker is positioned about 90 miles west of Vegas along I-15 which puts it about half way towards the city of Victorville where the next fast charger (50 kW) is to be found.

The new Baker BTC chargers will also see use in some additional new EVgo installations. One such location is an upgrade taking place now at the Whole Foods Market at 777 The Alameda in San Jose, California.

That site and some others coming soon may take advantage of power-splitting much like most Tesla Supercharger locations can do in order to optimize the use of charger capabilities. Instead of dedicating a fixed power capability to each dispenser and charging space, adjacent spaces may dynamically split the power output so one car can charge quickly while another charges slowly to top off its battery pack.

Details on the new planned charging capabilities at the Whole Foods market locations are not yet available.

EVgo has also been recently experimenting with adding adapters at some locations that allow Tesla vehicles to charge using the CHAdeMO cables and connectors that normally support the Nissan LEAF and some other Asian car models. 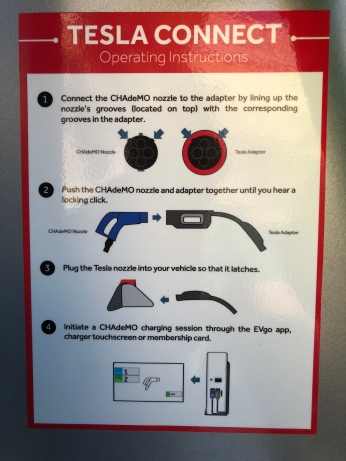 The adapters, made by Tesla, are mounted on the side of  EVgo chargers at these locations to allow any Tesla Model S or X to charge (the new Model 3 sedan is not yet supported).

Locations that include Tesla DC charging adapters are: