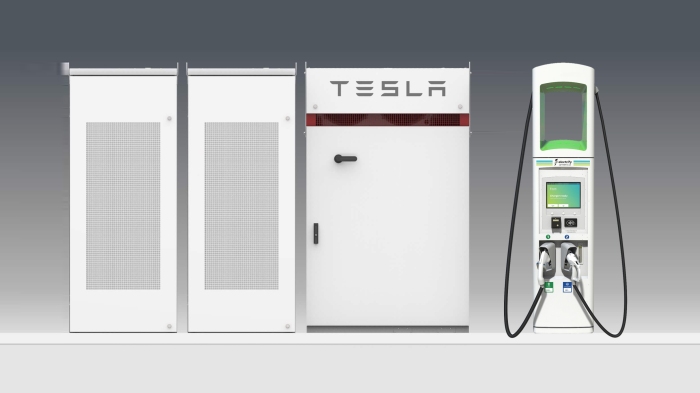 “Our stations are offering some of the most technologically advanced charging that is available,” said Giovanni Palazzo, chief executive officer of Electrify America. “With our chargers offering high power levels, it makes sense for us to use batteries at our most high demand stations for peak shaving to operate more efficiently. Tesla’s Powerpack system is a natural fit given their global expertise in both battery storage development and EV charging.”

The company didn’t say which specific locations or types of locations would receive the storage. The company is in the last portion of “Cycle 1” development which covers the first 2.5 years of a 10 year plan. That planning cycle ends in June and Cycle 2 begins on July 1, 2019.

According to Electrify America, each of their locations with battery storage will initially get two Tesla Powerpack battery cabinets for a combined capability of about 350 kWh of storage and output of about 210 kW of power and more capacity can be added later as needed. 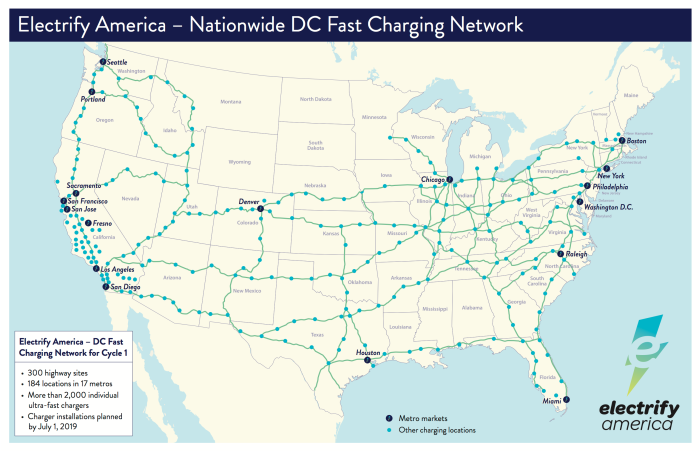 Each of the company’s roughly 300 highway locations planned as part of the Cycle 1 plan typically includes two charging spaces individually capable of up to 350 kW of output to vehicles using the CCS charging connector. Highway sites also have between two and eight additional charging spaces each supporting up to 150 kW of output using CCS. One of the 150 kW spaces is cabled to support CHAdeMO charging at 50 kW (with a planned upgrade to 100 kW).

The company’s roughly 184 planned community DC charging sites in 17 metro areas were initially intended to mostly support between three to six 50 kW charging spaces (one with CHAdeMO). Recently the company has said its plans were updated to make many or most of those sites support 150 kW charging instead.

The initial Tesla Powerpack systems being installed by Electrify America will be similar to, but half the size of, those installed at Recargo’s first DC charging site in Prunedale, California near the central coast along US-101.

The specification nameplate on the side of each of the four Powerpack battery cabinets at Recargo’s Prunedale location.

Like Loading...
‹ Does the new 62 kWh LEAF battery have “an additional fan” for cooling?
Electrify America reveals national plan for Cycle 2 investment ›