The California Energy Commission (CEC) issued “stop work” orders earlier this year against Recargo, the parent company of PlugShare, for non-performance on two major DC fast charging installation grants, according to commission staff. One of those grants has now effectively expired while the future of the other grant remains unclear.

The two grant programs, known as GFO-15-601 and GFO-15-603, help to cover the cost of installing fast DC charging for electric vehicles along highway corridors throughout California. The programs were intended to help complete California’s part of the so-called West Coast Electric Highway. After a competitive bidding process, grants were eventually awarded to four companies in 2016. Recargo’s grants covered 22 planned charging sites mostly along US 101 running north and south near the coast.

Eight planned, but never built, Recargo sites between San Jose and Buellton were covered by the “601” grant and are in a section of US 101 that has relatively poor charging coverage today. A 130-mile DC charging gap between Salinas and San Luis Obispo is covered by only a single, relatively slow, CCS-only 24 kW ChargePoint charger in Paso Robles and that site is about 100 miles from Salinas. Each of the proposed locations would have received at least one dual-cabled DC CHAdeMO and CCS charger along with an AC J1772 charging cable.

Under the “603” grant, another 11 sites are planned to be built by Recargo along US 101 north of San Francisco together with three more sites tying together 101 with CA 99 mid-state between Gilroy, Los Banos, and Chowchilla. 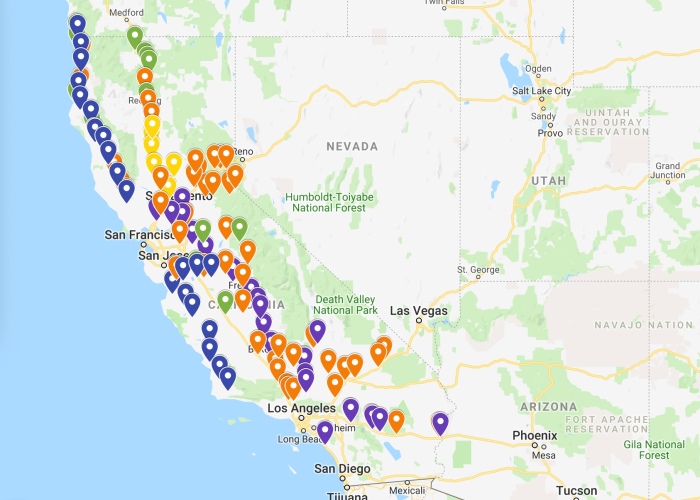 This unofficial interactive map of the “601” and “603” CEC grant sites shows Recargo’s planned locations using blue markers running mostly along US 101 near the Pacific Ocean. The map was created by online automotive forum user “miimura” who posts at TelsaMotorsClub.com and other sites.

Grantees can be paid incrementally for their work by filing status reports with the energy commission detailing their expenses and the progress they are making towards designing sites, purchasing equipment, and performing installation work. CEC staff say Recargo has filed no recent progress reports and has not been paid any of their total allotted grant funds worth nearly $4 million. However, Recargo did file changes to update the locations of their proposed charging sites as reflected in CEC grant program addendums published in late 2018 and early 2019.

Recargo has been undergoing corporate ownership changes during the past year. It was bought last October by Innogy, a German company involved in renewable power generation and electric vehicle charging at a time when Innogy itself was already in the process of being acquired by another German energy company named E.ON. It’s not clear how much Recargo’s ownership changes and corporate realignments might have contributed to the delay on implementing their CEC grant projects.

Last year, Recargo began promoting its plans for a “Recargo Network” which would begin with the CEC sites and a previously built site near Salinas constructed with grant money from the Monterey Bay Air Resources District. Future expansion plans were envisioned throughout other western US states. During the summer, the part of Recargo’s website describing these plans was removed but the company insists it still hopes to build a major charging network. 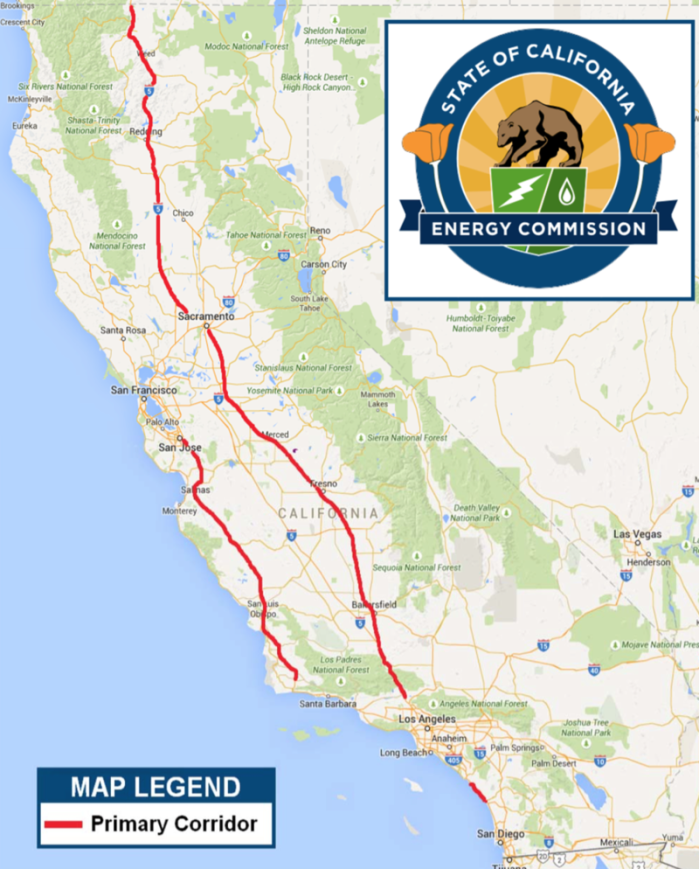 The red highlighted route to the left between San Jose and Buellton shows the section of US 101 where Recargo was awarded “601” grant funds to help build eight DC chargers.

At some point, apparently many months ago, the company filed to extend its originally proposed “601” project completion date of July 30, 2019. According to Carl Pancutt, Recargo’s Director of EV Charging Infrastructure, by around July 2019 the CEC eventually agreed to allow the deadline to be extended. However, according to CEC staff, the underlying “601” grant program rules effectively mandate that all charging equipment must be installed no later than September 2019 so the deadline extension was never legally executed.

CEC staff say the “601” grant rules assume several months of operational time after equipment installation and that the filing of a final project completion report by the grantee should occur 60 days before March 31, 2020 after which any remaining funds can no longer be dispersed. 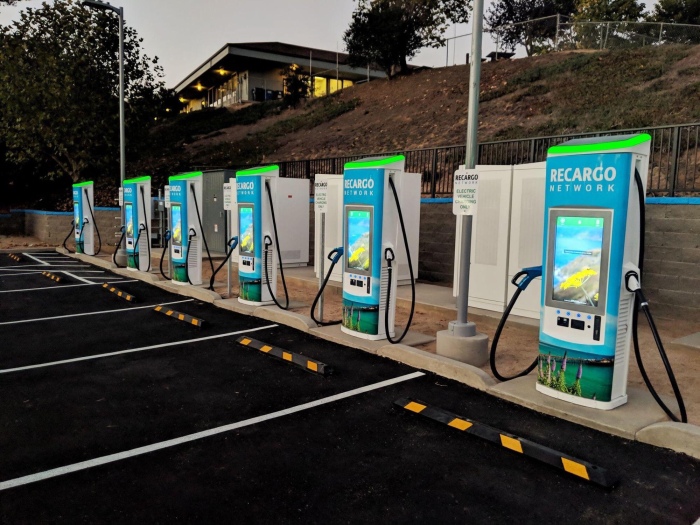 Recargo’s only DC charging site, located behind a shopping mall in Prunedale, was built using grant money from the Monterey Air Resources District.

Despite the conflicts over the California grant money, Recargo CEO Brian Kariger told Electric Revs via email that the company is “still planning to have all of the sites built”. According to Kariger, “We are engaged in active discussions with partners about all of our planned locations” but he declined to be more specific about the timeframe.

The company is believed to be still hoping to salvage its “603” CEC grant which carries later deadlines.

Update: Recargo has released an additional statement from CEO Brian Kariger (below):

We have received nothing but support and encouragement from our parent company, Innogy, to complete the corridors and meet all the requirements of our grant agreements with the CEC. Unfortunately, during the pre-construction process we encountered numerous issues with sites that caused us to seek and acquire alternative locations and make extensive changes to our plans, and due to these issues and further delays in obtaining required approvals, we were unable to complete the southern corridor on the CEC’s schedule.

Nobody is more disappointed than I am about this result. Nevertheless, we continue to work with partners on completing the US-101 corridor. These efforts are ongoing and confidential, and we hope to bring you positive news in the very near future. This has been a humbling experience, and has served only to deepen the profound respect we have for the Tesla Supercharger team, EVgo, Electrify America, and others building high-powered charging routes connecting distant communities.

According to commission staff, the company will need to provide convincing evidence of their intent and capability of completing the “603” grant sites before the CEC is likely to lift its “stop work” order and agree to extend Recargo’s original “603” completion deadlines to March 2021 as Recargo has requested. A purpose of the “stop work” order is to avoid incrementally funding projects that appear unlikely to be completed by the grant deadline.

Some other grantees have been given extensions to their originally planned dates, mostly due to electric utility connection delays, but CEC staff says ChargePoint, EV Connect, and EVgo have been filing monthly status reports and are believed to be largely on track to meet their deadlines.

Recargo was the only CEC grantee installing chargers along the southern section of US 101 but the section north of San Francisco is also getting sites installed by ChargePoint under the same overall “603” grant program.

Separately from any CEC grant funding, Electrify America is independently installing high-power DC charging sites all along US 101 in California that are planned for completion by the end of this year.

The delays in construction of the new DC charging has frustrated some electric vehicle advocates because charging coverage gaps on some highway routes can make traveling less convenient, result in slower charging times, or even make the routes unusable for vehicles with shorter battery driving ranges.

“These stations have been needed for years. The people of California counted on Recargo to build them. They didn’t get the job done. We’ve effectively lost five years of network development on those routes”, said Paul Gipe, an EV advocate who has been closely monitoring DC charging installation progress in southern California.