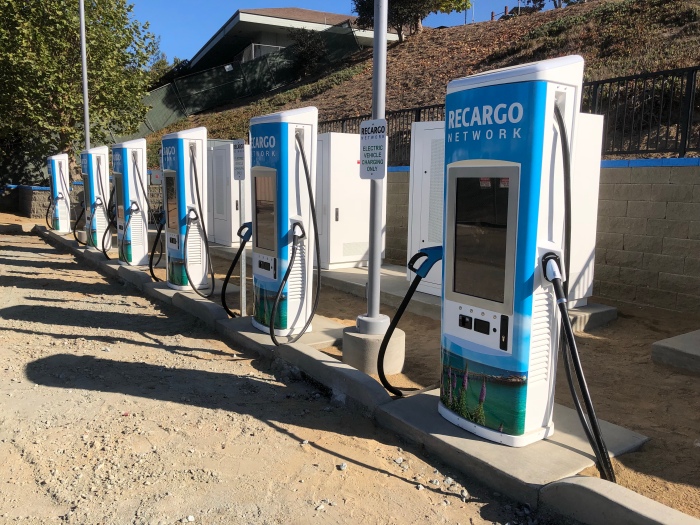 Recargo is nearing completion on its first DC charging location which is being built adjacent to US-101 in the small town of Prunedale near Salinas and Monterey in California.

The new location, along the back side of the Prunedale Shopping Center, features 6 charging spaces powered by chargers believed to be from BTC Power. Each charging pedestal has a dual-cable configuration supporting CHAdeMO and CCS connectors.

The dispenser pedestals have been customized for Recargo but the associated power cabinet may be similar or identical to the 200 kW model described at the BTC Power website. Recargo has previously claimed a power of 175 kW for these chargers but the next lower- powered BTC Power model is rated at 150 kW.

That 200 kW model can output up to 500A for vehicles that charge at under 500V using the liquid-chilled cable and CCS connector.

The dispenser pedestal itself is believed to be rated for up to 350 kW at a peak of 500A and the power cabinets may be upgradable in the future.

As with all currently available chargers, the CHAdeMO cable and connector are conventional and designed to support up to around 100 kW. Liquid-chilled CHAdeMO cables are not yet certified or available from parts suppliers even though the CHAdeMO Association specifications for charging at up to 400A have been approved since 2017.

The location also features a stationary storage system made by Tesla. It appears to have four Powerpack version 2 cabinets each of which, according to Tesla’s online specifications, can individually store 210 kWh of energy and output up to 50 kW although a Recargo press release has previously claimed “over 500 kWh” of combined energy storage. The older version 1 Tesla Powerpack cabinets only have a capacity of 100 kWh each.

Funding to help build the Prunedale site came from the Monterey Bay Air Resources District. The site was originally planned to open in August, according to a March, 2018 press release from Recargo.

Recargo, the parent company of the widely-used PlugShare public charging site listing service, is also due to soon begin building a string of 8 fast charging locations along US-101 south of San Jose between Gilroy and Buellton which is 40 miles northwest of Santa Barbara.

Another string of 11 future CA Recargo locations along US-101 begins in Healdsburg north of San Francisco and runs up to Smith River near the Oregon border. There are also three locations across CA-152 and CA-33 that connect US-101 with CA-99.

Those chargers are partially funded by a grant from the California Energy Commission and mostly consist of one or two dual-cable fast DC chargers together with a 240V AC charging cable. They are targeted for completion by the end of 2019 or early 2020. 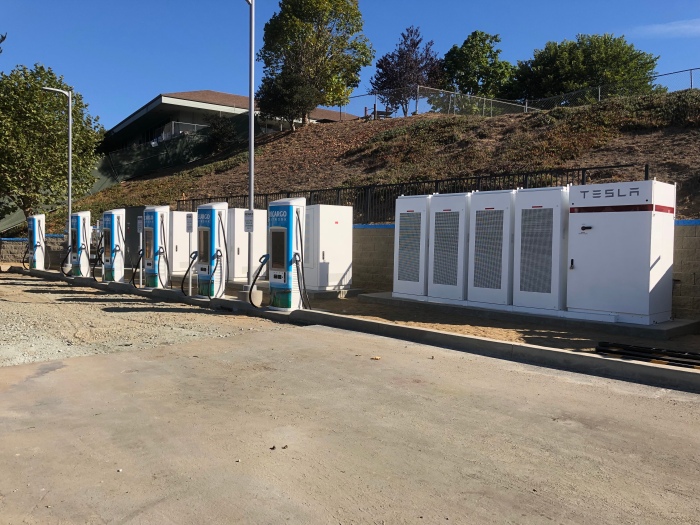