Electrify America proposes to heavily invest in ultra-fast DC charging in 9 metro areas of California between July, 2019 until the end of 2021, according to a plan recently submitted for approval to the California Air Resources Board (CARB).

The proposal also includes some expansion and operational costs for highway corridor charging, educational outreach efforts, and some smaller projects but continues to provide no funds to support hydrogen fuel cell vehicles.

The plan is a reversal from the first cycle of funding ending in June of 2019 which is spending $75 million on highway charging and $45 million on metro charging.

The new plan proposes to spend $95 to $110 million on metro DC charging locations with between 3 and 10 charging spaces. A typical location would have 5 charging spaces supporting up to 150 kW but some locations would only support 50 kW and others may include some 350 kW charging.

The plan calls for spending just over $150 million on EV charging infrastructure. The table below shows the approximate number of new community DC charging locations to be added.

New DC charging sites would be added at the existing 6 California metro areas from the first cycle of investment and would add new regional community charging zones around Santa Rosa, Santa Cruz, and San Bernadino. 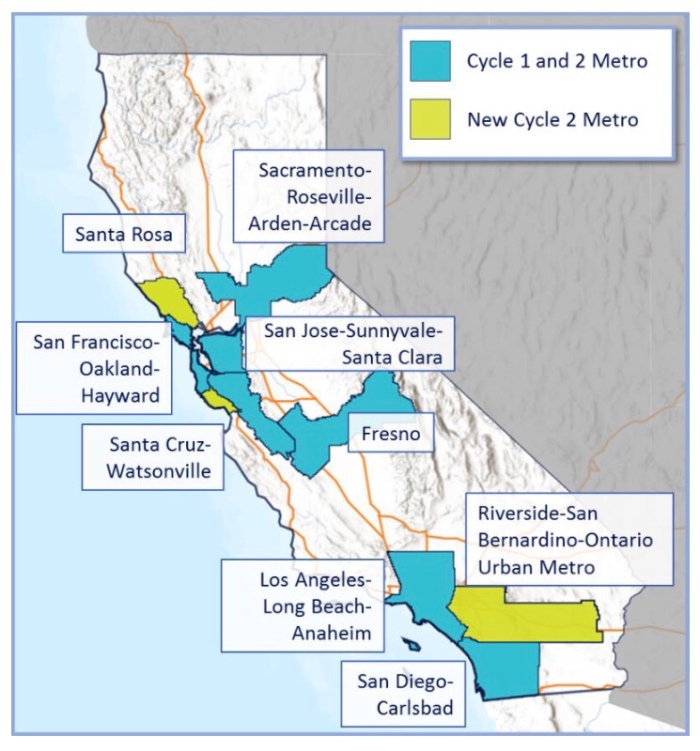 The overall breakout of the new planned community DC charging locations is heavily focused on retail locations with nearly 50 locations to be added. Around 10 locations would be added at residential complexes and a similar number will be targeted to support charging of cars used for services similar to Uber and Lyft.

One new project will spend around $7 million to install about 3,000 individual residential 240V charging cables at little or no up-front cost. Installation would be paid for by Electrify America which would continue to own and maintain the equipment in return for usage fees. Eventually, the equipment ownership would revert to the individual customer.

Educational outreach and advertising , such as the Jetstones television ad, will also continue.

Consistent with targets set by California law and CARB, about 35 percent of the infrastructure and some other investments are intended for low-income or disadvantaged communities.

CARB is set to review the Electrify America plan and hear public comments at a future public hearing expected to occur on or about November 15 in Sacramento. Plans for the second investment cycle outside California are likely to also be released in the coming weeks.

Funding for Electrify America, a Volkswagen subsidiary, comes as a result of legal settlements with the state of California and with the federal government related to the so-called “dieselgate” scandal. VW is putting aside a total of $2 billion which will be spent in 4 investment cycles over 10 years. Of that amount, 40 percent or $800 million is dedicated to California.

A press release from Electrify America gives an overview of the nearly 100 page cycle 2 plan.