Yes, Edmonton. In Alberta, Canada. A distance of about 1,600 miles in four days. Most people would probably fly to a destination that far away but I like to drive.

In fact, I had previously driven a Bolt EV (my personal car) from San Francisco to central Utah, to Seattle, and several times to Los Angeles or San Diego.

Why Edmonton? I went to visit an old family friend I hadn’t seen in many years. Also, there was available fast charging along the way.

I started my trip after doing a full charge overnight at home. After heading towards California’s state capitol in Sacramento I linked up with I-5 and turned northward.

My first stop was in the Central Valley town of Williams at a 24 kW ChargePoint station. I sampled the local cuisine at the Carl’s Jr. where the charger was located and then did some provisioning at the Dollar General store across the street. After 50 minutes of this I had added 17 kWh which was enough to get me to Redding.

That charger is one of a string of similar units at spots along the east and west coasts that were installed with funding from BMW and VW in conjunction with their i3 and e-Golf marketing a few years ago. These 24 kW units only support the CCS standard for DC fast charging.

While there is reasonable CHAdeMO charging in Oregon for Nissan LEAFs and other Japanese EVs, there hasn’t been much in Northern California until recently.

ChargePoint is now installing new 50 kW dual-cable chargers at some of these existing 24 kW locations with partial funding provided by the California Energy Commission (CEC). Electrify America plans to install highway charging along I-5 over the next year as well.

The first of those new CEC 50 kW units was opened in Redding late last year. I charged for an hour on it and gained 36 kWh (good for 130+ miles) while eating lunch.

Another of those new 50 kW units is north of Redding in Dunsmuir although it wasn’t finished when I stopped there so I used the older 24 kW charger instead. I had planned to check out Yak’s restaurant, which is attached to the charger, but it turned out to be closed on Tuesdays so I did a quick walk around the area and unplugged after 20 minutes.

After a further 100 miles I arrived in Yreka. This was another location with a 50 kW upgrade-in-progress so I charged for an hour and 15 minutes at the older 24 kW unit while I chomped down on a grilled rainbow trout dinner at the Black Bear restaurant across the street. The trick to enjoyable road trip charging is to do something useful while your car charges.

The added 23 kWh was enough to get me up and over the Siskiyou Summit near the Oregon border and into Grants Pass, Oregon.

Grants Pass is the location for one of the early Electrify America stations being built by Volkswagen as part of their dieselgate settlement with EPA and the state of California. Sadly, the installation wasn’t quite finished yet so I plugged into yet another 24 kW ChargePoint charger. 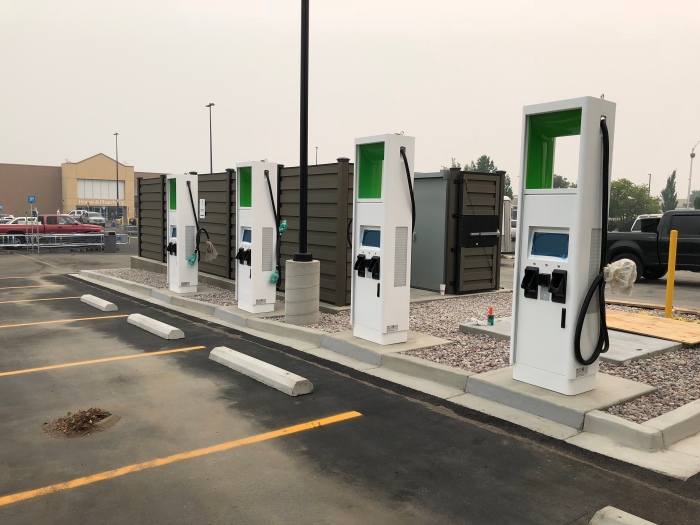 This one was located at a Fred Meyer superstore which is where these are typically installed in Oregon. I did some slow motion shopping and left with a couple of grocery items. Total time: 51 minutes for 17 kWh.

Charging at this slower rate gets to be a little tedious but these stations will soon be obsolete for highway use.

I arrived to spend the night in Sutherlin, Oregon about 470 miles from home. It had been a long but pleasant day — about 12 hours since I left San Francisco a bit before 9am. I plugged in using a dedicated Clipper Creek 240V charging cord installed at the hotel.

In addition to having overnight 240V charging, the Best Western in Sutherlin has an excellent free breakfast with an omelette station. Highly recommended.

I left with a full overnight charge and continued on I-5 toward Portland. I ended up in Tigard just 10 miles short of there at an EVgo site near an Apple store where I needed to buy an iPhone accessory. An hour of charging added 34 kWh.

It would be a long rural stretch east of Portland to my eventual evening destination in Spokane and most of it has minimal charging coverage. I topped up at the last EVgo station on the eastern edge of Portland in Wood Village for 20 minutes and then continued on I-84.

My next stop was 122 miles later at the small town of Arlington along the Columbia River. My car slurped electrons at the single charger there while I had lunch at the nearby Pheasant Grill. 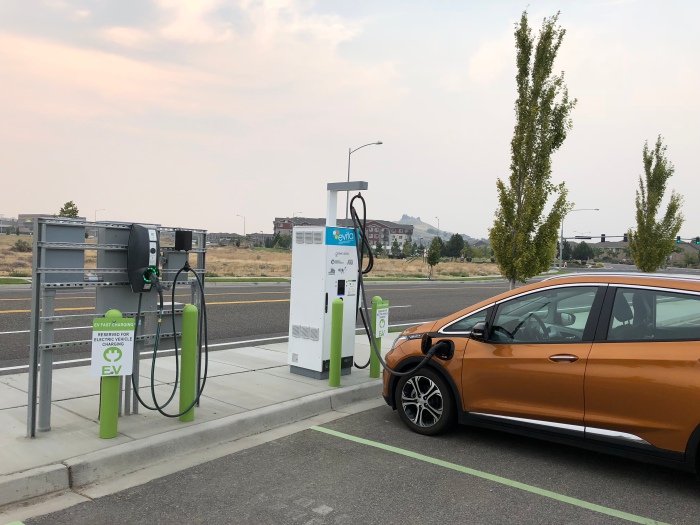 Next stop, Kennewick, Washington about 80 miles further along. I charged 32 minutes on a Greenlots machine while getting a latte at the nearby Roasters Coffee.

Then, finally, Ritzville! It’s not as fancy as one might think. I plugged in to the EVgo charger next to Frank’s fruit and veggie stand and the Conoco gas station. There wasn’t much to do except eat at a nearby restaurant but I wasn’t hungry. I walked around a bit and then carefully analyzed which brand of snack chips to buy at the Conoco convenience store.

Some 520 miles after my morning start in Sutherlin, I arrived in Spokane and plugged in the car at 240V for a full overnight charge at my hotel.

So far I had driven about 1,000 miles since I had left home. Today I will cross over into Canada.

I headed out of Spokane east on I-90 and then headed north on US-95 near Coeur d’Alene, Idaho.

There isn’t any CCS fast charging in Idaho yet and there is only one slower AC J1772 charging cable along the way on US-95 in the tourist town of SandPoint. This is not a problem since Creston, British Columbia is only 140 miles away from Spokane. 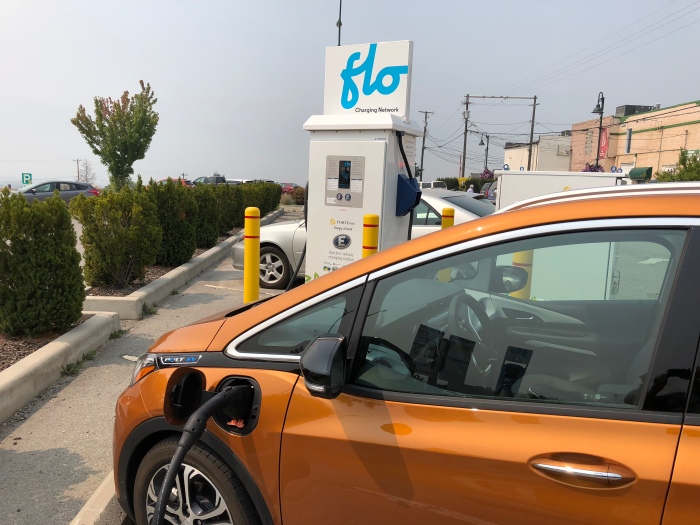 FLO charger in Creston, BC.

After crossing the border, I arrived at Creston and plugged into my first FLO charger after downloading their phone app and opening a new account. FLO is a major Canadian charging provider.

While charging, I helped another tourist visiting from Vancouver to create his own account so he could plug in his Prius at the adjacent 240V J1772 cable. One ice cream cone later I headed off to my destination for the day.

I visited several days in eastern BC before continuing off to Edmonton.

The first segment of “day 4” took me up to the mountain town of Golden which is along the Trans-Canada Highway just west of Banff National Park. I charged at a FLO station and got an early lunch around the corner at the Island Restaurant. It rests on a small island between the outer banks of the Kicking Horse River.

As I am typing this article now I just realized the Island Restaurant is almost 700 miles northeast of Portland, Oregon and the river along side of it flows into the same Columbia River that ends up in Oregon — the rivers join just a mile away from where I ate lunch in Golden. Weird.

Anyway, the veggie pizza and a local beer were excellent. I continued eastward through Banff and into the big city of Calgary, Alberta.

I stopped at a FLO charger in Calgary and headed over to the nearby Walmart. It was 2:30pm and time for a mid-afternoon Filet-O-Fish at the in-store MacDonald’s. After wandering around the store and hitting the bathroom I headed back to the car and unplugged. My 58 minute charge added 34.6 kWh.

Calgary is about 300 km or 186 miles from Edmonton so I stopped at the only DC charger along the way in the town of Red Deer at a small outlet of the ubiquitous Canadian Tire retail chain. After a brief 17 minutes and 12 kWh I was on my way again to Edmonton.

My hotel of choice, the Sawridge Inn, listed a standard J1772 AC charger along with a Tesla AC destination charger on the PlugShare app and website. The J1772 charging cable did not appear to be working when I arrived. Fortunately, I had brought along a “Tesla Tap” adapter that allowed me to plug in to the other cable.

My return trip was more or less a reversal along the same route but instead of routing through Banff, I went south on highway 22 after Calgary and then west on highway 2. Also, instead of staying in Spokane, I stopped overnight in Richland, Washington.

This was an excellent and very enjoyable road trip — relaxed and casual with time to stop, charge, and walk around between bouts of driving.

The next time I make this trip, as early as next summer, I should be able skip all of the older 24 kW chargers and either use 50 kW ChargePoint chargers or the even faster Electrify America locations all along the way from San Francisco to Spokane.