The first five California locations listed by Electrify America as “coming soon” are in varying stages of construction but the community DC charging ones are nearly complete.

Highway corridor locations are designed for long-distance travelers and have between four and 10 charging spaces which are all capable of supporting up to 150 kW CCS charging. Typically two of those spaces support up to 350 kW.

The first three metro sites in California use new 50 kW charging pedestals made by BTC Power of Santa Ana, California. BTC is known for making many of the 50 kW chargers used by charging provider EVgo across its US network.

On non-CHAdeMO DC pedestals, both cables are equivalent which provides redundancy in case of cable or connector failures. One cable or the other might also more easily reach the charging inlet on different vehicle designs.

The spending plan during this first 30-month cycle of construction calls for at least 50 highway sites and about 110 community sites among six metro areas in California. A proposal for the next 30-month plan beginning in July of 2019, was recently submitted for approval by the state’s Air Resources Board.

These first five sites were visited and photographed within the last week.

This town is 15 miles south of the state’s capitol city of Sacramento.

This location in the Walmart parking lot at the Laguna 99 shopping center is still surrounded by temporary fencing. It seems to be only missing a utility transformer to connect it to the underground medium voltage distribution line. 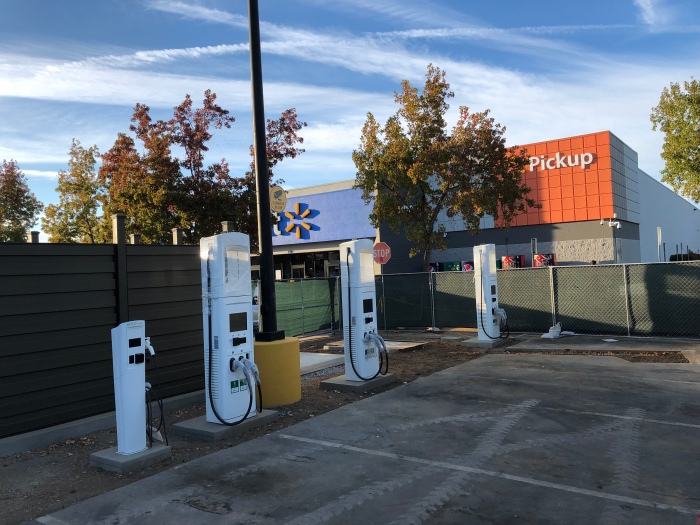 Montebello is a suburb located near the middle of the larger Los Angeles area. The nearby town hills were once dotted with petroleum field pumps operated by Standard Oil.

The equipment here is the same as in Elk Grove but is arranged differently to match the parking lot layout. 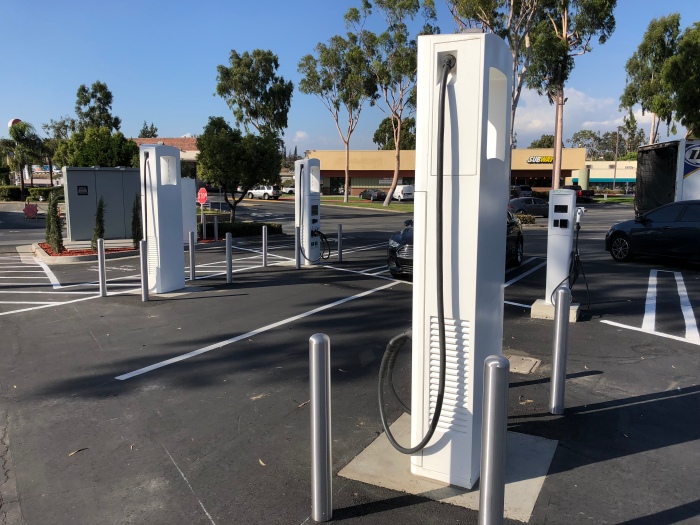 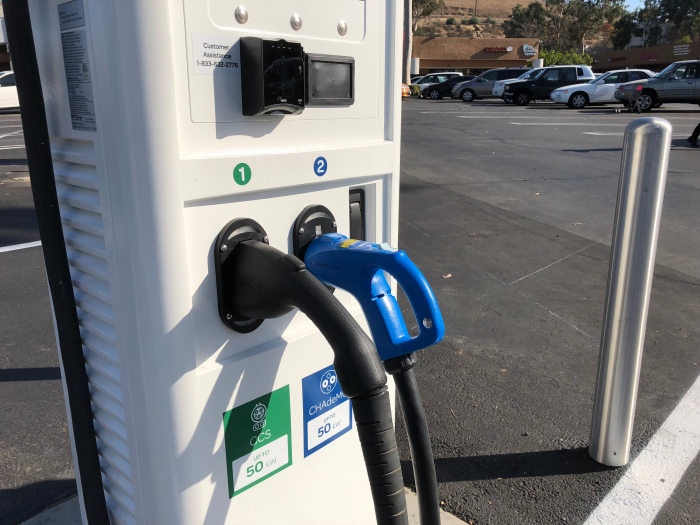 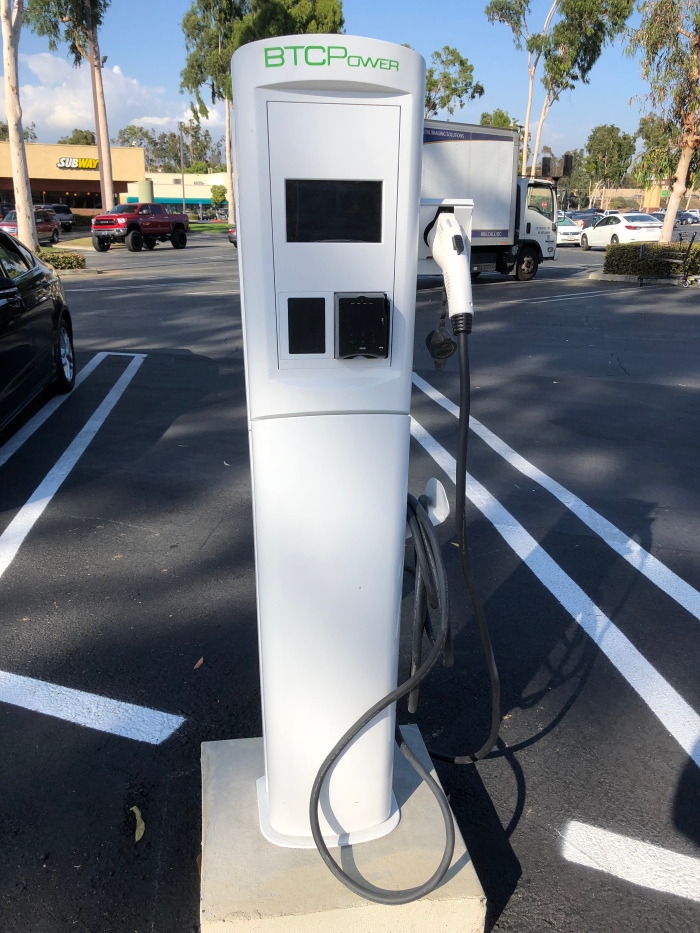 Again, three 50 kW chargers (one of which has a CHAdeMO cable) and a 240V AC pedestal. This is located at the Country Hills Shopping Center near a supermarket.

This photo appears on the PlugShare page for the Torrance location.

BTC is also making other styles of pedestals and higher-powered chargers for other companies.

Altogether, Electrify America is planning to build around 110 metro DC charging locations in California. Others are being built in the 11 metro areas included in Cycle 1 outside of California.

This is a highway corridor design along US-101 and is located at the Novato Fair Shopping Center. Novato is in Marin County north of San Francisco.

The nearly completed conduits appear to indicate that this location will have a long row of 10 charging spaces. 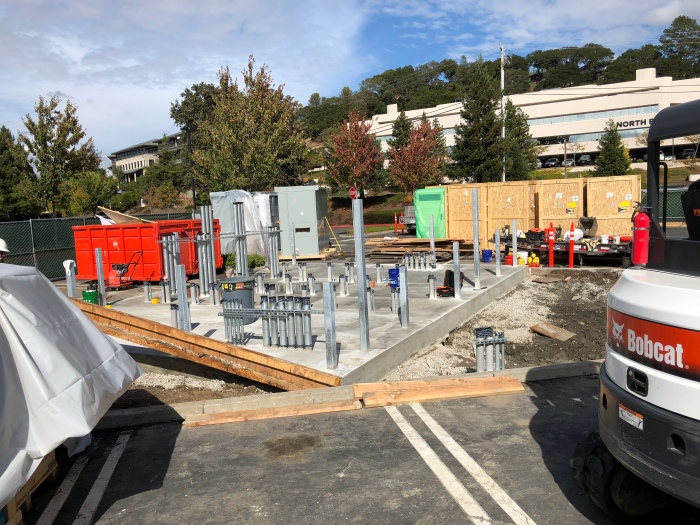 This location is in the parking lot shared by a Motel 6 and an America’s Best Value Inn. It’s just off of I-5 on the edge of this small town only 40 miles northwest of Sacramento and yet it is clearly in the rural Central Valley.

When this photo was taken last week, there was a crew trenching and boring conduit for the high voltage distribution feed running along a nearby street — a lot of work to support four charging spaces (at the moment). 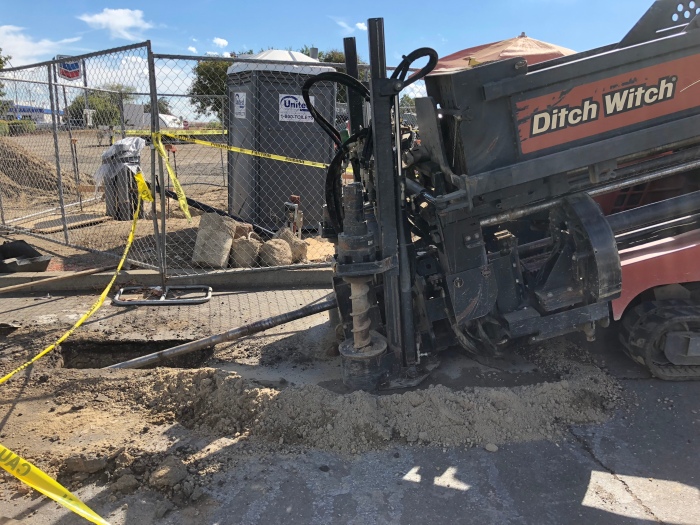 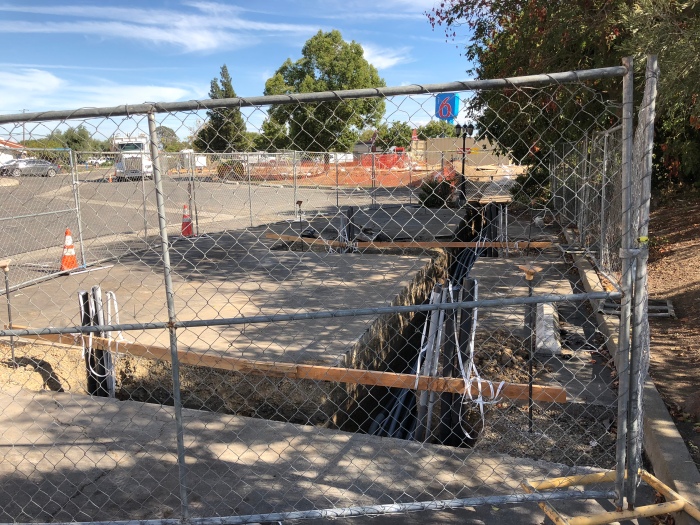