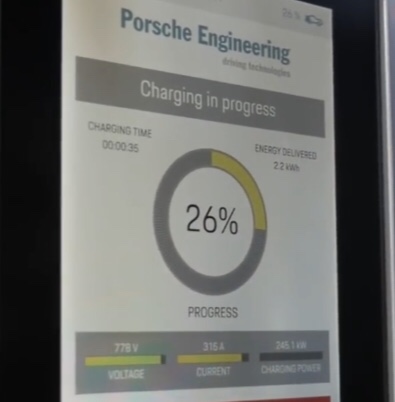 A new video shows one of Porsche’s new all-electric vehicle prototypes charging in public, perhaps for the first time, at 245 kW.

The Cross Turismo is a variant of the Porsche Taycan using the same powertrain. The Taycan is expected to come to market first, sometime in late 2019 or early 2020.

A brief moment about 18 minutes into the video shows the car stopped for charging at one of the new generation of CCS chargers capable of putting out “800V” or more.

The charger display shows the battery being 26 percent full as it soaks up 315A at 778V. The image capture takes place 35 seconds after charging had begun.

The fastest charging cars on the market today come from Tesla and are capable of taking in a peak of about 120 kW. Tesla is said to be working on a new “Supercharger 3.0” design which would boost its charger power capability. The company’s Model 3 EPA filing says the battery in the 310-mile long range version of the car is capable of charging at just over 500A and the future Superchargers may allow for that. Today the Model 3 is limited by existing Superchargers to around 370A.

The charger shown in the video is a “Porsche Engineering” ultra-fast CCS unit designed for installation at Porsche dealers and is thought to be made by BTC Power. It is theoretically capable of providing around 350 kW.

The car would be able to charge at the same rate at the 350 kW charging spaces being install at nearly all of Electrify America’s near 300 planned highway corridor charging locations being built over the next year int the US. At each of those sites two of the charging spaces typically support up to 350 kW while the additional two to eight spaces support up to 150 kW.

Electrify America is also building an additional 180 or so community DC charging sites in 17 large metropolitan regions around the US. Many of those sites will support up to 150 kW charging while others support only up to 50 kW.