Home › Charging › Nissan LEAF PLUS can charge at near 100 kW, but where?

Nissan LEAF PLUS can charge at near 100 kW, but where? 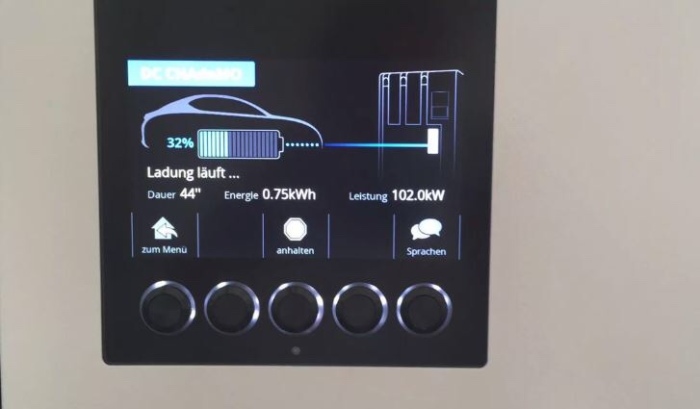 When Nissan revealed the new 62 kWh LEAF model last week it told reporters that the car can charge at a peak rate of around 100 kW which raises the question — where does one find a CHAdeMO charger that can allow the new LEAF to charge at that rate?

You might think that a so-called “100 kW” charger would do the job but you would probably be wrong. That’s because chargers labeled as “100 kW” may have a peak current output of only 200A and actual car batteries are designed to charge at voltages much lower than 500V.

Last June, the Swiss charging equipment supplier EVTEC tweeted (and then deleted) the results from charging a prototype LEAF with a battery pack of around 60 kWh at a private industry compatibility test event for prototype products. The prototype LEAF charged at 102 kW.

A prototype LEAF PLUS charging at 102 kW at 32 percent state of charge.

The LEAF PLUS battery pack, like the previous 40 kWh model, has 96 cell groups in series. In a 40 kWh LEAF pack each cell group is made up of two cells wired together in parallel. In the 62 kWh pack there are three cells per cell group.

In a typical EV, a lithium ion cell group operates from approximately 3V to 4.15V and multiplied by 96 cell groups that works out to a pack that operates at closer to 300V when near empty to around 400V when full.

Nissan hasn’t published highly detailed battery charging specifications and no 62 kWh cars are in customer hands yet but typically such a battery charging at 32 percent state of charge would have a charging voltage of around 360V to 365V.

At a charger limited to 200A that would be about 72 kW. Charging at 102 kW as seen in the EVTEC tweet implies a charging current of about 280A.

Charging at 280A implies the use of unusually thick and heavy conventional cables or, more likely, a liquid-cooled cable and CHAdeMO connector. Such cables are not available from suppliers today but this EVTEC tweet was sent from a testing event for prototype products. 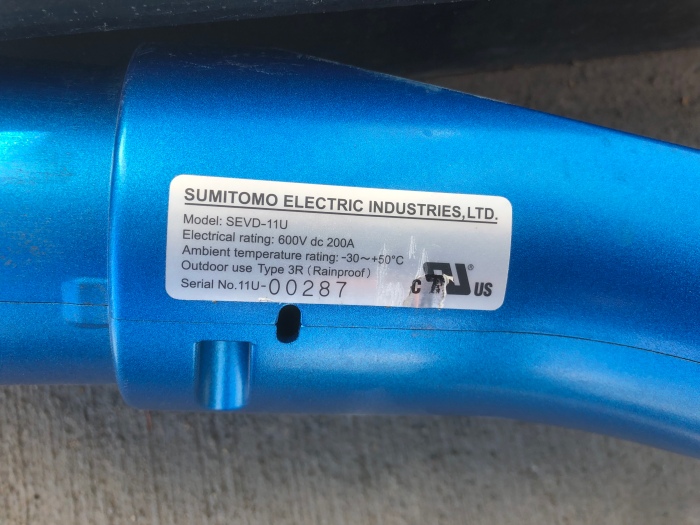 A new CHAdeMO connector rated for 200A.

Since only 200A conventional cables and connectors are available today for CHAdeMO that is what is being installed during the initial rapid deployment of high-power chargers. The same chargers typically support liquid-cooled cables for the other standard charging connector, CCS, at currents of 350A up to 500A.

In the US, Recargo recently opened a charging site with CHAdeMO cables rated for 200A. It’s possible that some of their planned 22 future sites in California may also support that capability. EVgo is in the last stages of installing their first 100 kW upgrade site. All the new Electrify America sites include a single CHAdeMO cable rated for 100 kW but so far the cables are being limited in software to 50 kW until more testing is completed.

When liquid-cooled CHAdeMO cables become available it may be possible to upgrade existing 200A cables on such chargers so that CHAdeMO and CCS will have the same power output capability.

Like Loading...
‹ Nissan denies reports, rumors that LG is a cell supplier for the LEAF battery
5 ways the new LEAF wins against the Kona and Bolt ›