Home › Charging › How to Supercharge a Tesla Semi

How to Supercharge a Tesla Semi

Several Tesla Semi truck prototypes have been seen during the past year on public highways making long-distance trips around the United States but the actual process of charging the Semi at a Supercharger site has been shrouded in a bit of mystery.

Superchargers are public locations and Tesla customers are often charging their own cars when a prototype Semi pulls up. Often, but not always, a team of engineers arrives first to reserve the several charging spaces physically needed to park the large truck but they may also be reserving the ability to plug the truck into multiple Supercharger dispensers.

On these occasions, Tesla employees have commonly asked onlookers not to photograph the adapter arrangement that allows the truck to charge at today’s existing Superchargers. In the future, the trucks will have their own dedicated Megacharger stations.

While there has been a claim of a Semi using five dispensers, most reports from witnesses say the charging process uses between one and four. This could make sense because rare images of the truck’s charging inlet show four pairs of power pins along with a few signaling pins in one corner. 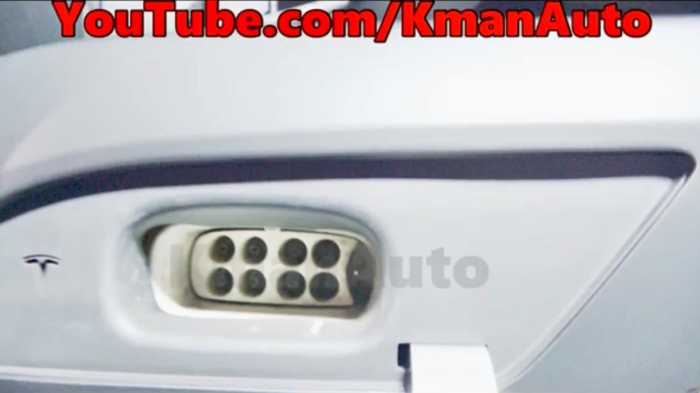 A screen capture from a video of a Tesla Semi truck charging inlet taken during the reveal at Tesla’s Hawthorne, CA facilities on November 16, 2017.

It is speculation, but it seems reasonable to assume that each individual pair of pins in the truck inlet can be connected to the pair of power pins coming from a single Supercharger dispenser. This would allow up to four Supercharger dispensers to be connected. Or, there could be a common “bus bar” setup in the adapter box that matches any number of incoming Supercharger connections to all four pairs of power pins going to the truck inlet.

Assuming all four pairs of pins are ultimately connected in common to a single large battery in the truck, the different Superchargers would have to be closely coordinated in order to join together to mimic what would be a single Megacharger dispenser in the future. 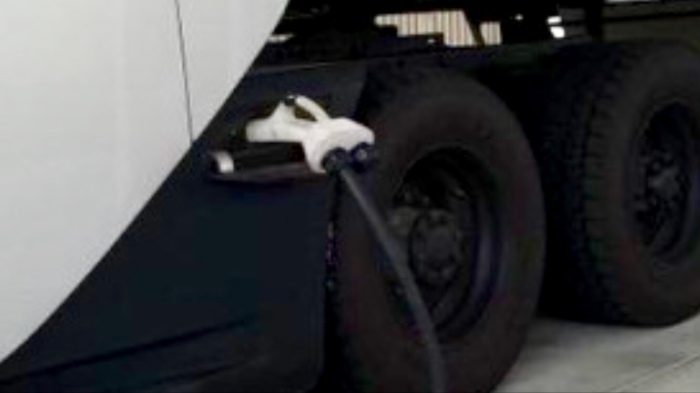 A blowup of the connector plug image appears to show that it allows for two incoming cables.

In the case of using a single Supercharger dispenser, all that may be needed is a simple cable adapter box. As seen in the photo at the top of this article, the charging cable and connector leading to the Semi comes out one side of the small box and the other side has a traditional Supercharger inlet.

That photo was posted to a Tesla-related group on Facebook several weeks ago. It shows Tesla’s new truck connector which has not been seen previously on any of the websites like Electrek, Teslarati, or InsideEVs that closely cover Tesla.

Update: the above photo was taken at Tesla’s Kettleman City Supercharger site in California in January, 2019.

Update: A new photo of a charging Tesla Semi emerged on June 29, 2020 showing the same charging connector but with both cables being attached to yet another variant of the adapter box. Another box, not shown in the picture, was used to combine the cables from two V2 Supercharger stalls into the single cable leading toward the adapter box seen here. Photo credit: @sacramentotesla on Twitter in Rocklin, California.

Tesla employees have said that some of the Semi trucks being tested have a range of about 300 miles although the company also intends to sell a 500 mile version. The range estimates are said to be based on pulling a typical trailer load. It’s pure speculation, but the truck might use something like 2 kWh per mile.

When connected to one of its future Megacharger dispensers, the company has said it will enable the 500-mile version of the truck to recharge about 400 miles of range in 30 minutes. That might imply an average charging rate of about 800 kW and a peak rate of 1 MW or more (thus the name Megacharger).