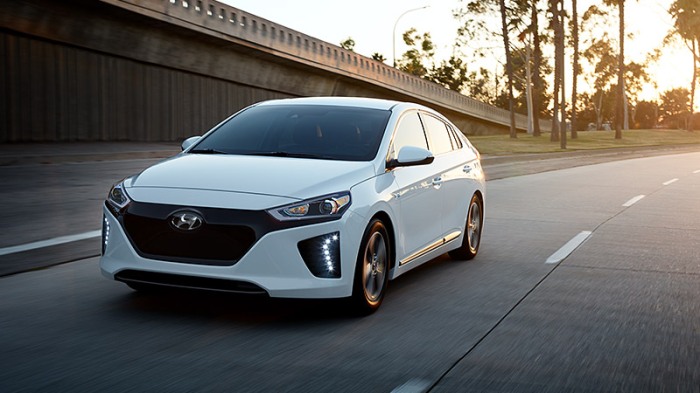 The Hyundai Ioniq Electric can charge “at up to 100 kW” on a DC charger sort of like a Tesla can do at a Supercharger.

There appears to be no evidence that this is true or that Hyundai ever actually meant to say that the Ioniq would do that.

Standard disclaimer: this is an Auto Correction article. Topics are chosen not to point out a mistake in a specific article but rather to discuss a recurring point of confusion in media coverage or among EV enthusiasts. Getting all of the details correct in every article is very difficult (if not impossible), especially on a deadline.

This 100 kW claim has been reported by multiple news sites over the last couple of years since Hyundai revealed the car at the Geneva and New York auto shows in 2016.

“When the time comes to charge, the Ioniq offers the usual support for 6.6-kW 240V home chargers as well as DC fast charging at up to 100-kW. While that’s a bit less than the 120-kW offered by Tesla Superchargers, it’s still double the 50-kW available with most other current EVs. Now you just need to find a 100-kW charger.” — Forbes

When discussing charging in an Ioniq Electric review article…

“Ioniq Electric has DC fast charging available with an SAE Combo connector and can charge up to 100 kW, faster than other models on the market. — ChargePoint blog

From articles as recent as February, 2018…

“Hyundai says its Hyundai Ioniq Electric is currently the only vehicle available in North America that can charge at 100 kW on some of the top Combined Charging System (CCS) hardware that’s rated to 100 kW or more.” — Car and Driver

There seems to be no evidence that Hyundai itself has said the car can charge at up to 100 kW. Rather, the company has given estimated charging times using phrasing like “when connected to a 100 kW charger”.

Hyundai’s recent marketing materials say it can charge from 0-80 percent in 23-24 minutes. The battery appears to have a usable energy capacity of about 28 kWh. If you take 80 percent of that it is about 22 kWh of energy that needs to be fast charged into the battery. Doing that in 24 minutes takes an average power rate of 56 kW.

It’s a bit challenging to find actual DC chargers for testing. Almost all publicly available units today are limited to 125A which limits charging to under 50 kW. This will change later this year but right now there are just a few chargers in Europe that are up to the task. Fortunately, a few videos of charging an Ioniq Electric at more powerful chargers in Europe have now been posted online.

The charger used in a Norwegian test by Bjorn Nyland is said to be capable of up to 120 kW overall according to the website of the charging provider, Arctic Roads, that installed it. However, a brochure on that apparent charger hardware from its manufacturer says that a single CCS plug is limited to 200A (100 kW).

The video appears to show the Ioniq charging at a rate of about 60-70 kW from near empty to near 80 percent full. Although not shown, the implied charging current appears to be around 175-185 amps which is a bit less than the inherent limits of the DC charger itself.

Just recently on April 4, GreenCarReports quoted Hyundai as saying at the New York Auto Show that the Ioniq Electric can charge at up to 173A or 70 kW although it still confusingly reported “that translated to a rate of 70 kilowatts—for which a 100-kw charging output was required.”

The most recent actual charging test came from Fastned, a European charging provider, in March. They tested an Ioniq Electric on an ABB charger capable of putting out 375A and reported that, again, the Ioniq drew about 60 to 70 kW while charging. 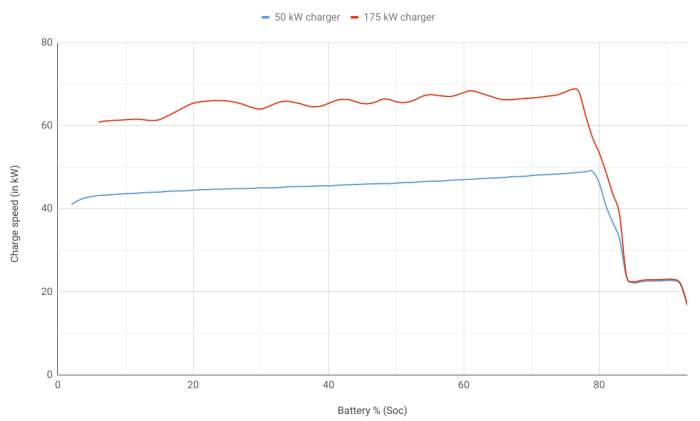 This graph from the Dutch charging provider Fastned shows the Ioniq Electric charging on a single cabinet ABB Terra HP charger capable of putting out about twice as much power as the car actually requests.

Like Loading...
‹ Bolt EV getting first “over the air” update
Porsche gives new details on US charging network ›