An existing EVgo site in San Jose has become the first of the charging provider’s locations to upgrade to the new generation of higher-powered DC charging equipment. The original two 50 kW chargers have now been replaced with what the company says are 80 kW charging dispensers although they can actually do much more.

Unlike sites being installed by Electrify America and Recargo with liquid-cooled cabling, this upgraded EVgo location is using conventional cabling and connectors rated for up to 200A of current. The previous chargers at the site, next to a Whole Foods Market at 777 The Alameda in San Jose, were rated for 125A.

Somewhat confusingly, existing chargers rated at 100A and 125A are both usually labeled as 50 kW although the 100A units charge many cars slower (because the cars are capable of taking 125) and no cars can actually charge at 50 kW at these chargers.

A more realistic rating for a 100A charger that is limited to 500V is probably 40 kW which is why EVgo’s new rating on its 200A chargers as 80 kW makes sense.

Today, a few car models can already take full advantage of the new units in order to charge at up to 60 percent faster. A car that might have topped-out at 45 kW might now be able to charge at around 70 kW. However many cars on the road will not see an improved charging rate or only a partial improvement due to their own vehicle electrical and battery pack limitations.

Existing cars that can take full or near-full advantage of faster charging at this new EVgo site include the Kia Soul EV, Hyundai Ioniq Electric, and Jaguar I-PACE.

The Chevrolet Bolt EV can take partial advantage by boosting its charge rate by about 20 percent from 45 kW at 125A to about 54 kW at 150A.

Other car models arriving later this year that can charge faster on the new equipment will include the Kia Niro EV, Hyundai Kona Electric which should both charge at a peak of around 70 kW.

The recently announced Nissan LEAF PLUS will also charge at near 70 kW although it’s capable of a peak rate of 100 kW on newer charging cables that are not yet available from suppliers.

See also: Nissan LEAF PLUS can charge at near 100 kW, but where?

Only the Audi e-tron SUV arriving this spring will be substantially limited at 200A and be able to charge a lot faster at a location with liquid-cooled cabling that can do 300A or more.

With older equipment, the charging dispenser included the actual charger power electronics but in the new generation of equipment this is often moved into a separate cabinet.

At this new Whole Foods Market location there are two charging cabinets each of which support two charging dispensers for a total of four charging spaces.

Although EVgo is identifying the charging dispensers as 80 kW they are actually capable of much more, according to the company. 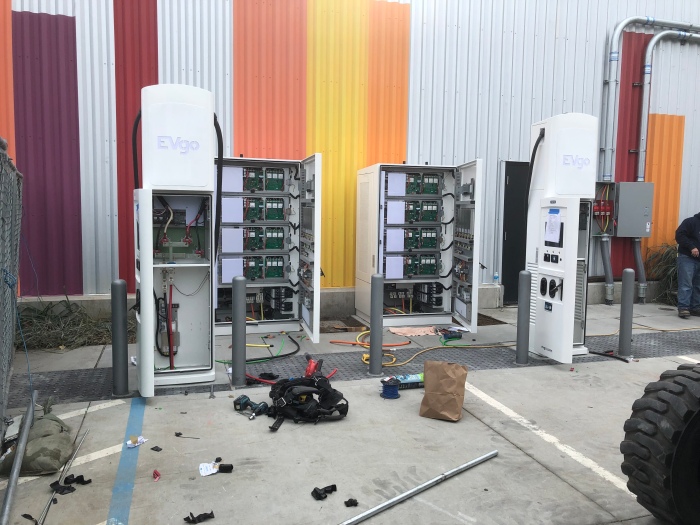 The two dispensers attached to each charging cabinet are actually configured to dynamically split power depending on whether both dispensers are in use and how much power is being drawn by the connected vehicles.

Because the conventional cables are limited to 200A, the power splitting capability won’t be evident with today’s cars that are designed with battery packs that charge at less than 500V. In the future, some cars like the Porsche Taycan (due in 2020) will be designed to charge at around 800V which is twice the charging voltage of today’s cars.

When a Taycan is plugged in at one of the new San Jose charging spaces it should be able to draw up to around 160 kW at 200A if the other charging space using the same charging cabinet is not in use.

That’s impressive, but at a 350 kW charger the Taycan and similar future EVs like the Porsche Cross Turismo can charge even faster.

An advantage of EVgo’s approach using conventional cables in urban charging is that most cars will be able to charge “fast enough”, the cost of equipment is lower, spare parts are more easily available, and without the liquid cooling the equipment might be more reliable. The cables also might be easier for drivers to use.